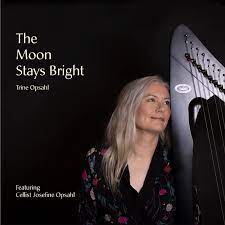 Following rather quickly on her critically acclaimed duet album with cellist/daughter Josefine Opsahl (The Infinite between Us), Celtic harpist Trine Opsahl has released what I consider to be her most serene, meditative, and comforting album to date – The Moon Stays Bright. Josefine does appear on a few tracks, including alternative versions of solo harp tracks from this same album. Those "alt" takes are substantially different so don't make the mistake of thinking some songs are "duplicates" since they are not.

I've been a huge fan of Trine's Celtic harp recordings since I heard her second solo release, 2012's Somewhere in a Hidden Memory (I later heard her actual second recording which was her first duet release with Josefine, Leaving My Silent Empty House). Admittedly, I love Celtic harp music, but when that instrument is in the hands of such a skilled, talented, and soulful artist as Trine, well, it's just magic, pure and simple.

Besides being a recording artist, Trine is also a Certified Therapeutic Harp Practitioner and performs throughout Denmark, playing for terminally ill patients and their families to ease the emotional (and physical) pain of the patients' passing. This level of musical empathy, so to speak, is present on all her albums, but on The Moon Stays Bright, it glows the brightest I have heard so far. The sensation of calm, serenity, healing energy yet peaceful resignation are palpable from the first note to the last. I can't imagine an album more suffused with these qualities and, obviously, this would be an excellent choice for everything from massage to meditation to, well, funeral services, to be honest.

As mentioned in the opening paragraph, daughter and renowned cellist Josefine Opsahl joins Trine on three tracks which are reworked version of three solo pieces from the album and the other nine songs are all solo harp pieces. Of note, three of the solo pieces are wholly improvised, those being "Moonscapes I" and "II" and "III." These three songs carry an undertone of ethereal wonder, and I imagine watching the moon drift among broken clouds with these as a soundtrack would be a special time indeed. Some of the other songs carry subtle Celtic influences, discernible if one listens for it.

The three tracks which are duets display Josefine's stellar cello artistry but in a more subdued style than some of her previous collaborations with her mother. As I have stated in each of the efforts as a duo, Josefine and Trine play as if of one mind, one soul, and one heart.

I dislike ranking albums from artists whom I consider to always be at their best on every recording, so I can't state that The Moon Stays Bight is Trine Opsahl's best release (because it would be like a parent picking a favorite child), but it is her most serene and soothing work, at least to my ears. I could listen to this for hours and never tire of its ability to erase my cares and worries.