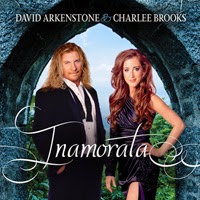 Let's get one thing clear right away: Charlee Brooks has an amazingly beautiful voice. She could probably read Facebook status updates and make it sound gorgeous (and that would be quite the accomplishment). Inamorata is a fitting arena for displaying her crystal clear tone, her impressive range, her pipes, and more than anything else, her emotionally rich way with English lyrics. Paired as she is here with both originals and covers, backed by consummate musicians under the leadership of one of the true legends in New Age music, David Arkenstone, and her singing soars to new heights of magnificence. Yeah, a bit hyperbolic, but when she gets into the meat of a song such as "Did I Make the Most of Loving You?" I get serious chills.

I am not always a fan of an operatic style of singing, and I wouldn't describe Brooks' vocals that way, although I can imagine some will hear them as such. I think her vocal motif is more along the lines of the classic pop singers through the years who are/were accompanied by orchestras. She never reaches for bombast, even when she was going full tilt on high notes. It's a rare gift to be able to sing the way she does and performing these types of songs and not come off as melodramatic or schmaltzy, yet she pulls it off in grand fashion.

Now, when addressing David Arkenstone's role in this wonderful album, one cannot overstate his talent on guitar and piano/keyboards, but that is not the most important element he brings to the party. His arrangements are fantastic (much like they were on my favorite album of his, Sketches from an American Journey). The strings are never overblown, instead always serving as the perfect complement to Brooks' singing. Each of the original's melodies are beautifully constructed and I never heard anything that I would characterize as a musical cliché or overwrought.

Moving on to the music itself, it needs to be stated that Inamorata is not at all a "new age vocal" album, a la Enya, so if you are a long time fan of Arkentsone's work on Narada and some of his later discs, you may find yourself scratching your head. This is "classic" orchestral pop music, but you need to understand what I refer to as "pop" is not lightweight "pop/rock" but the kind of music that great "pop" singers have performed through the years starting in the '40s and '50s (or, maybe a better example would be to compare it to movie musicals or Broadway show tunes). My problem with the latter comparison is that I think this is better than a lot of recent show tunes in that it avoids being overly theatrical, i.e. it achieves a "big" sound without sacrificing, for lack of a better term, intimacy. I think this must be due to Brooks' voice and how it was recorded. And please, let's not compare Brooks to Celine Dion (no offense to the latter meant). While the back of the album reads "Music Style: Easy Listening" (and perhaps for some folks, it is), that may chase some of you away (your loss, trust me), I cringe at giving it that label. So, we're left with referring to it as "orchestral cinematic pop vocal," which may be a mouthful but at least it does the music and singing justice from my perspective.

I'm no lyricist so I can't "review" the songs' words (only two tracks are instrumentals), but for whatever it's worth, I think they (i.e. the originals) are well written and, surprisingly (for pop music), lacking in triteness. It should be obvious that the "theme" of the album is love and romance (the album title means "…a person's female lover…a woman with whom one is in love") and the songs capture the most powerful emotion in a variety of ways. The covers are all well done, especially Brooks' version of the theme from Downton Abbey, titled "Did I Make The Most Of Loving You?" which also features one of the album's best orchestral scores and arrangements by Arkenstone. One of the two instrumentals is the theme to Game of Thrones so you know I am down with that (it's one of my favorite TV shows of all time). Of the originals, I don't know that I can single out a favorite, as that would take many playings to whittle it down.

Stunningly well-produced, flawlessly engineered and mixed, and featuring superb orchestral performances and arrangements, as well as spotlighting one of the finest female vocalists in the current genre of pop music—well, what more could you want in an album? Inamorata may not appeal to hardcore Arkenstone fans, since it lacks the fantasy mysticism of the recent Arkenstone-Brooks collaboration Lovéren, and it bears little resemblance to his instrumental discography (or at least his earlier works), but I imagine that was the intent. Inamorata is an album that allows one to fully appreciate Brooks' magnificent voice as well as Arkenstone's many talents for arranging and performing. I can't think of a better gift for a paramour than this ode to romantic love.

Inamorata is available for purchase at Amazon, iTunes, or directly from the label here.

Issue 10 of Wind and Wire now available for viewing online 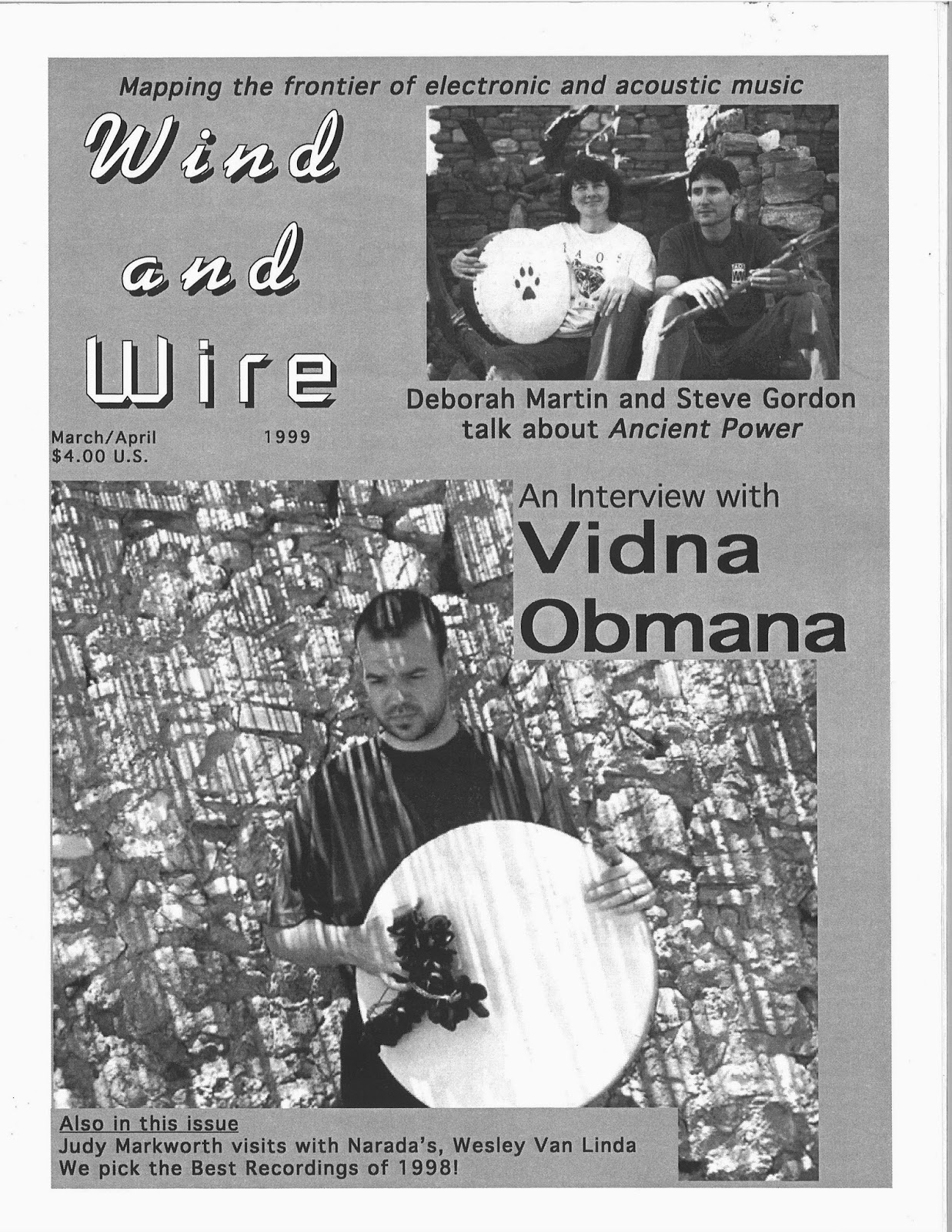 Click here to view Issue 10 of Wind and Wire, which was originally published in March/April of 1999. This was a notable issue for its interviews with Vidna Obmana (Dirk Serries), Deborah Martin and Steve Gordon (a cross-label collaboration between Spotted Peccary and Sequoia Records) and most importantly, staff member Judy Markworth snagged an interview with Narada Records founder Wesley Van Linda. Read and Enjoy and leave your comments if you feel inclined to do so.
Posted by Bill Binkelman at 8:44 PM No comments:

Issue 9 of Wind and Wire available for viewing

Click here to read Issue 9 of Wind and Wire, the magazine, originally published in November/December of 1998.

NOTABLE IN THIS ISSUE: Phil Derby joined our reviewing stable and made an immediate impact with his well-written and knowledgeable critiques of EM and ambient music. The value of his contributions in the latter stages of the magazine cannot be overstated and I was pleased when, after Wind and Wire ceased publication the next year, Phil started his own own periodical, Electroambient Space (which eventually went online after being a hard copy zine for awhile and existed until August of 2010...read Phil's insightful reviews here).

Also, Kathy Parsons (her website, Mainly Piano) conducted a fascinating interview with New Age music pioneer Ray Lynch. I believe it was one of the last ones he gave before he more or less disappeared from the active music scene (his last release, Nothing Above My Shoulders But The Evening, was released in 1993).

This issue saw the review section become even more professional looking with more album covers and the move to a more compact font and layout.

I hope you enjoy the issue. Leave comments if so moved - always appreciated.
Posted by Bill Binkelman at 9:39 AM No comments: