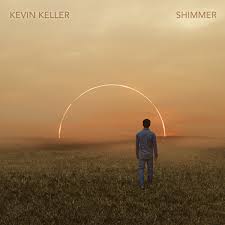 By now, when I am reviewing certain artists who have shown they are masters of multiple styles of music, I shouldn't be caught that much by surprise, but I must admit that even knowing how talented pianist/keyboardist Kevin Keller can be, Shimmer blew me away. Shimmer is a brilliant mélange of Berlin-school, ambient, and minimal piano soundscapes, that also does what only fantastic albums do, i.e. its relatively short playing time left me craving "More, please, sir" (a favorite phrase of my wife, Kathryn, when she wants more of something).

I've been a huge admirer of Keller's work since reviewing his album, Santiago's Dream, in 2006. I consider his "triptych" of melancholic chamber pieces: 2009's in absentia, 2012's the day I met myself, and 2013's nocturnes, to be a singular masterpiece, after a fashion, as if all  sprung forth from the same artistic wellspring of emotion.

Keller has certainly ventured into electronic music before, including his most recent release, the brilliant The Front Porch of Heaven (which I criminally admit to never having found the time to review). On Shimmer, you will hear some superb slices of Berlin-school EM, such as the opening rapid sequencer work on "Orchards" and the truly epic "Riverbend,' (a wonderful 8+ minutes and which, to my ears, equals anything from the heyday of the Groove Unltd label). However, Keller doesn't dip his toes into just that Germanic style of music. The title track is a voyage into somber piano refrains framed by haunting wordless female vocals which, to me, could almost be used as part of the soundtrack to the film Annihilation, (although I admit that part of my association to that film is not just the beautiful moodiness of the music, but also that the film centers around a mysterious area called "the shimmer"). "Ithaca" is ambient bliss, a series of drifting soundscapes played against a background of faint piano melodies. The layered electronics on "Bridges" have a pleasing retro sound to them and interlock perfectly with some of Keller's best piano work on the album, as the latter paints in midtempo but introspective and shadowy colors. The album closes with "Delta" which echoes some of the music from his triptych mentioned above as it's closer to a chamber music aesthetic, with the surprising (to me, at least to me) inclusion of some Fender Telecaster played by Keller. Keller's guitar playing mirrors some of Robin Guthrie's (Cocteau Twins)* sonic qualities but not in any manner of imitation, merely as how it sounds within this context.

Two things outside of the brilliant music are worth mentioning. One is the jaw-droppingly beautiful and evocative cover which, again, I believe elicits comparison to Annihilation, even if the association may seem forced to some of you readers. The second thing that struck me is the cryptic but fascinating track titles which I find fascinating. I am not one hundred percent opposed to song titles that either convey the song's main idea or that indicate the particular mood of the music itself. However, being a longtime fan of Tim Story's likewise pleasingly obscure titles (especially on his album, Beguiled), I've always appreciated artists who think outside the box when it come to "naming" their work with something other than one of the standard formulas.

With Kevin Keller, one never knows what will spring forth from his muse, but I am always confident I will enjoy it and even marvel at his imagination, talent, and versatility.

*Thanks to the artist for this. Kevin let me know that that Guthrie was a direct inspiration.