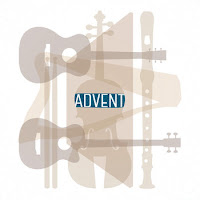 Advent is a holiday album released by the group Erwilian, an ensemble that I regret to say I am almost entirely unfamiliar with (I regret it because based on Advent I would enjoy their music, I imagine). Advent, however, is not your typical holiday recording, at least I suspect it will not be for most American listeners. While the maxi-EP (six tracks, about thirty minutes of music) only contains one original (by group member and acoustic guitarist Scott Melton), of the other five traditional carols, only one was familiar to me, "Carol of the Bells." The others are, I would guess, better known in Europe, and specifically, France, England or the UK. That statement has literally nothing to do with the quality of the music on the EP, or the artistry of the performances of the band members. It is merely a relative statement of the carols' "familiarity" to me, and I would imagine, the average casual holiday music lover.

Erwilian's members are the aforementioned Scott Melton (acoustic guitar, mountain dulcimer), Jordan Buetow (harmonium, percussion, soprano recorder, hammered dulcimer), Matt Garcia (harp, bass), John Hintze (celesta, drums, percussion, hand bells), Malcolm Lee (bass), Bethel Melton (hammered dulcimer, chimes), and Keely Rendle (violin, mandolin, acoustic guitar). You can judge (I hope) by the instruments, that Erwilian's sound evokes a bygone era in English folk music, and a most ear-pleasing era it is. I've always been a fan of both the recorder and the hammered dulcimer, and the musicians who play these do so with uncommon talent. All of the artists contribute mightily to the overall "whole" of the recording and the production quality (engineering, mixing, and mastering) is flawless.

Let me start out with the one carol I am familiar with, "Carol of the Bells," which gets a fantastic interpretation, featuring no less than THREE hammered dulcimers playing the lead melody. This has always been one of my seasonal favorites and Erwilian does right by it, infusing it with the right mixture of haunting beauty and jaunty energy. The hand bells are the perfect touch as well. By the end of the track, the energy level and drama have ramped up before coming to a wonderful fade out. "Wexford" kicks off the EP with the droning harmonium counterbalanced by twinkling celesta notes and the main melody on violin. The mood at the outset is pastoral, evoking a gentle snowfall over rolling hills, switching to an uptempo cheeriness enhanced by hand percussion and hammered dulcimer. Simply delightful! Recorder also contributes to a truly festive musical atmosphere later in the song, and one can envision the countryfolk dancing in joyous celebration. "Whiteout," the original composition by band member Scott Melton, reminds me of any number of midtempo tunes by the duo Tingstad and Rumbel, owing to the fact that it features acoustic guitar and recorder (although, technically, Nancy Rumbel plays the ocarina, but the similarity is still there to my ears). Gently rollicking, the main melody is also covered by violin, the music should elevate the listener's mood nicely – it does mine.

The next two tracks have their origins in France, I believe. "Animaux: La Crèche" (here translated as The Friendly Beasts but I think it can be loosely interpreted as the animals which appeared at the Nativity, and "Animaux: La Faune" (which, per Google translate, means "wildlife animals." Both are listed as traditional and the latter is noted as a Burgundian carol. "Animaux: La Crèche" is a lovely slow tempo carol, featuring guitar, celesta, dulcimer, and recorder, and I could picture the various animals (frequently featured in paintings of the Nativity) at rest beside the manger. "Animaux: La Faune" immediately elevates the energy level of the melody and rhythm, making it easy to see how the two carols diverge, i.e. "friendly beasts" compared to their "wilder" counterparts. This song sounds like an English folk dance melody (as do some of the other here). Lively and spirited, but also possessed of a haunting mood at times.

The EP concludes with "Nova" which per the liner notes is "Westminster Quarters (Traditional)." The opening bells (sounding like church bells) obviously convey a joyous holiday spirit, as does the hammered dulcimer. The mood here is the most celebratory of all the tracks, with a more pronounced underlying rhythm and a "kick up your heels and let your hair hang down" feeling of joyfulness. It's great ending piece.

Advent may not be your typical American collection of holiday music, but I recommend you expand your musical horizons and give it a virtual spin. If you entertain family or friends, I have to think this would make great music for the gathering as it paints an appropriate festive mood but does so in unexpected ways when compared to the usual fare.

Advent and other Erwilian albums are available from CDBaby, Amazon, and iTunes.
Posted by Bill Binkelman at 11:10 AM No comments:

It wasn't until I checked his discography that I realized how prolific a recording artist Chapman Stick player Michael Kollwitz is (well over 20 albums released!). Santa Plays The Stick is his second holiday music album (the first being Frosty the Stickman, if I am interpreting his website store correctly). Obviously, if you are unfamiliar with what a Chapman Stick® (invented by the man for whom it was named, Emmett Chapman) is or how it sounds, just go to your streaming app of choice and plug in the artist's name. I have enjoyed Kollwitz's albums (I have heard the first three "Serenity" series recordings) as well others who have played this instrument, most notably Jeff Pearce's excellent releases.

As for whether or not Santa Plays the Stick will be your cup of tea depends on whether you enjoy the "Stick" itself. Since I do, and I also enjoy most holiday carols/songs, you can guess that I found a lot to enjoy here, including four originals penned by Kollwitz. Obviously, when it comes to "original" holiday music, it's difficult to state with any certainty if the song in question "sounds like a Christmas/holiday carol." There are no true "Christmas" motifs except in copying the classics, which most artists who attempt originals tend not to do. That leaves the listener to basically either find that the original fits or doesn't, thematically, with the abundance of traditional classics. In this regard, while none of the four stand out, the flow from an original to a classic is well-done.

Kollwitz concentrates more on the religious carols ("Away in a Manger, " "Angels We Have Heard on High," "We Three Kings," "Silent Night" are among the ones he chose) than the secular ones (present here are "Deck The Halls," "The Twelve Days of Christmas," "We Wish You a Merry Christmas") as well as his aforementioned originals ("Pile of Presents," "Snow Ride," "December Wedding," and "Basket Full of Joy"). All the classics are easily recognized, i.e. he does not needlessly embellish them (a smart decision, that) nor deviate from the main melodies. As a result, I found myself thoroughly enjoying his versions of these holiday favorites. As far as his originals, again, they fit in well and if they don't necessarily resonate as "holiday-ish," they don't jar the listener by throwing a deliberate curve in tone, mood, tempo, etc. To be honest, I would've preferred a few more secular carols instead, but most solo artists who release holiday albums do include a number of originals, and who can blame them?

Some tracks are uptempo and cheery in mood, some are serene and/or somber, although the originals tend to be the former and the religious carols the latter. Kollwitz deftly applies some sparse ambient textures, e.g. a wash of synth strings here and there, which help a lot in fleshing out the singular sound of the Chapman Stick. Again, my preference is that he used these "extras" a tad more, because their presence in a track is always welcome.

Santa Plays The Stick would, I think, work best to be played during more festive times of the holidays, as opposed to, e.g. quiet repose in front of the fire. It strikes me as a somewhat whimsical recording, except for the more somber of the religious carols. If the Chapman Stick® is not your thing, obviously, pass on this album, but I would certainly give it a listen, especially if you enjoy the traditional holiday/Christmas classics. Kollwitz is as talented on this instrument as I imagine anyone is, and his playing is both artistically pleasing and technically adept.

All of Michael Kollwitz's albums are available from the artist here.

Posted by Bill Binkelman at 11:03 AM No comments: