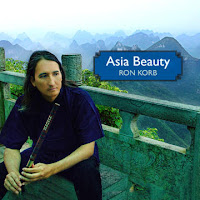 World-class flutist Ron Korb's Asia Beauty is more than just a magnificent album. Packaged as it is, i.e. as a literal hard-cover booklet containing gorgeous photography and copious liner notes (including an artist-authored story that serves as an inspiration for some of the songs) as well as the CD itself, it is a rare achievement (in fact, in my 18 years of reviewing, I can think of only one other album like this, that being Patrick Leonard's Rivers, released in 1997). However, what is even more praiseworthy is how Korb has meshed the multitude of Asian instruments (including the variety of Asian flutes he plays) with a western musical motif so that the resultant music doesn't alienate the less adventurous listener while also initiating the world music novice into the beauty and wonder of Asian music. In short, what he's done is to bring a western accessibility to Asian music (which can sometimes leave the unaccustomed ear feeling disoriented) without undercutting the music's authenticity. That he accomplishes this feat without resorting to "fusion" techniques, i.e. just taking Asian motifs and wrapping them in electronica beats and synthesizer textures, makes his achievement all the more remarkable (and I mean no disrespect to those who compose/perform global fusion electronica, a subgenre which I greatly enjoy and appreciate).

Korb plays a variety of Asian and other flutes, and in each case exhibits his complete mastery no matter which one he chooses. I have been a fan of his playing since I first heard him on Stephen Bacchus's album Pangaea (1990) and, in fact, on at least one track here ("Magic Sleep"), I was reminded of that recording. Korb composed all the music on Asia Beauty and his talent for meshing both eastern and western instruments may be unmatched. For example, take the opening track, "Hanoi Café," on which the erhu is combined with accordion, piano, bass and drums, as well as the western violin. Korb's flute (a non-Asian variety) flits above the other instruments while the erhu adds an exotic Far East element to the romantic piece. This is the strength of Asia Beauty—the seamless integration of authentic Asian instruments with more traditional western ones, e.g. piano, bass, drums, and guitar. However, it's not just the instruments but also the melodies composed by Korb which draw the listener in, whether she/he is acclimated to Asian music or not.

I mentioned earlier that Korb wrote a folk tale that serves as the backstory for some of the music on the album and those songs start with track two, "Journey Begins." One might suppose that these songs are the most "Asian" sounding and yes, there is an overt element present, however track six, "Children's Jig," inexplicably (and successfully) translates Asian instruments to an Irish sound and the piece is a winner, full of joy and cheer. "House of the Five Beauties," which serves as the focus of the story that Korb wrote, reinforces the more Asian influence, with erhu, yangqin, pipa, and guqin all playing an important role, and Korb himself playing the dizi (a transverse bamboo flute), although even here, cello, piano, and drums also contribute. Not meaning to repeat myself, but this song underlines what makes Asia Beauty the triumph it is, i.e. the melding of the Asian with the western to create something that honors both musical cultures.

The latter section of the album focuses on music which was influenced by locales that Korb visited in Asia, e.g. "Palace Garden," "Country Life," and "Two Mountains." "The Reed Cave" is something really special, as it presents Korb playing the Asian "dadi" flute solo in a limestone cave found in the Guangxi Province with a wonderful natural reverberation effect (a la some of Paul Winter's great recordings). "Blue Bamboo" intermixes a subtle blues motif with Korb's Asian flute (dizi) along with pipa (a four string lute), piano, and bass. As if the nineteen songs listed on the album weren't enough, there are two more bonus tracks, unlisted, but mentioned in the liner notes: "The Sword of Heaven" and the truly lovely album closer, "Jasmine Lullaby" which once again melds the Celtic (penny whistle and Celtic harp) with the Asian (via the melodic motifs).

Asia Beauty is about as essential a world music album as you are likely to hear this year (and likely this decade, too) and it represents a high point in Ron Korb's already impressive discography. Overflowing with creativity, imagination, and musical artistry, the recording features the motifs, influences, and instruments of the Far East and seamlessly seasons them with just enough Western flavors as a way of revealing Asia's rich musical heritage to unaccustomed ears. Throw in the gorgeous photography and the fascinating liner notes contained in innovative packaging and voila—a must-have release for world music lovers.

Asia Beauty is available directly from the artist or from  Amazon, CDBaby, or iTunes.
Posted by Bill Binkelman at 1:54 PM No comments: