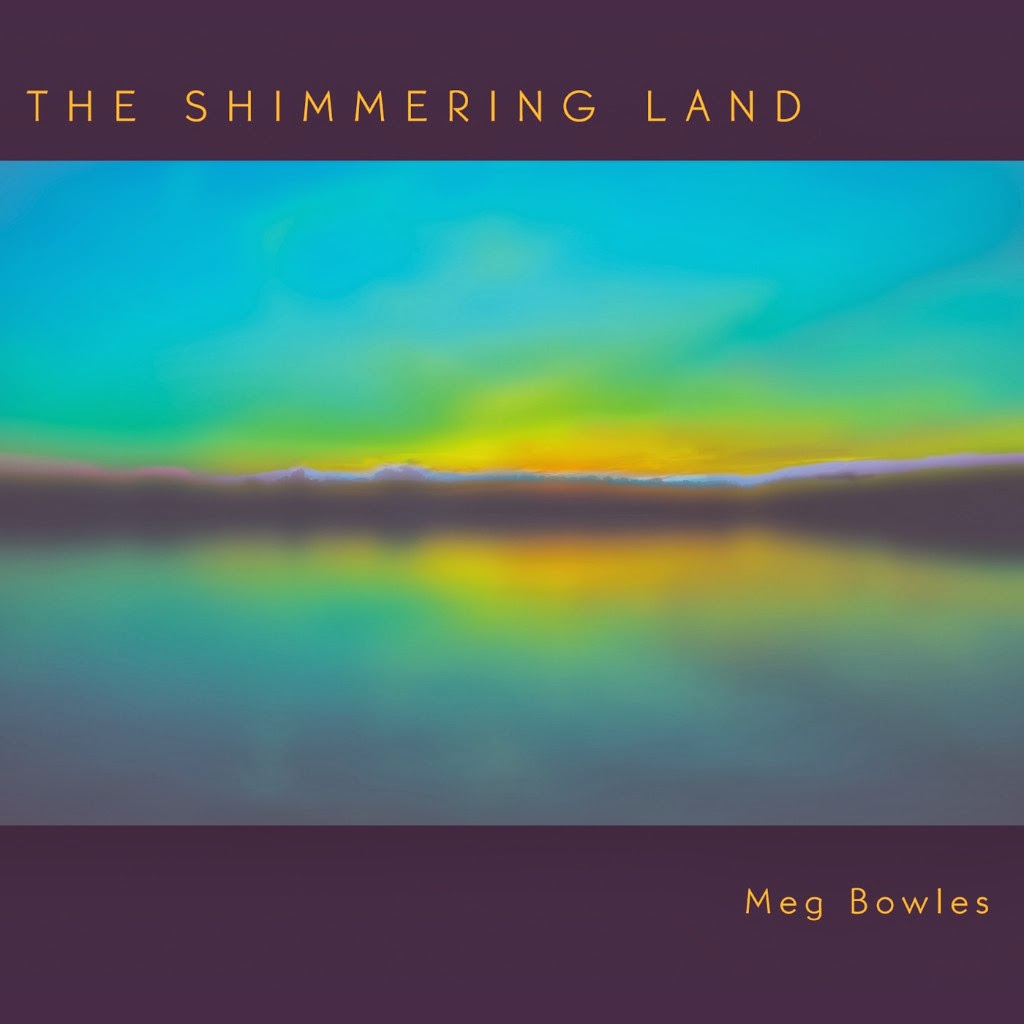 Synthesist Meg Bowles underscores the brilliance of her return to ambient and spacemusic (the acclaimed 2011 recording, A Quiet Light) with The Shimmering Land. After a 12 year absence from music, Bowles reemerged in 2011 and immediately took her place among the finest practitioners of floating, atmospheric electronic music recording today. With The Shimmering Land, Bowles ascends to the plateau of preeminent and essential artists in the genre. I don’t believe this to be mere opinion, but more or less fact. Her body of work is relatively small compared to some other notables (e.g. Roach, Serrie, et al.), yet her artistry, whether one listens to her earlier works, such as Blue Cosmos or From the Dark Earth or her recent albums, makes it difficult to dismiss her stature in the genre. While some might deem it important to emphasize that Meg is, after all, a woman in a predominantly male field of music, that actually devalues her music (although I believe her "femaleness" contributes something special to her style). Falling back on "she is one of the few women in this genre" demeans her, making it seem that being a woman somehow makes her music more special. The truth is that Meg Bowles' music stands apart from so many other artists not because it's crafted by a woman but because it is so damn good! Not just good, but singularly unique and expertly executed. With that said, I do not ignore the issue that Bowles is relatively alone in the spacemusic genre as a woman musician, but her gender neither adds nor detracts from her brilliance as an artist in this field populated by repetitive drone-meisters.

Bowles' flawless production, engineering, and mixing talents are in evidence throughout The Shimmering Land – the album sounds fantastic on headphones – while her husband, Richard Price, did an excellent job mastering the six tracks. One aspect in which Bowles excels is layering her assorted synthesizer shadings, washes, pads, and various rhythmic textures and effects. While The Shimmering Land can be enjoyed played in the background, it shines under direct listening where every detail of placement and balance of the synthesizers can be deciphered and appreciated. The spaciousness of the soundfield in the final mix, the detail of the assorted synths, the overall encompassing effect of the assembled parts is staggeringly beautiful, and that is the word to use when describing Bowles' music – beautiful. She has the unique ability to make music that flows with an organic humanity while also brimming with cosmic wonder and awe. Never truly dark or foreboding, yet also not saccharine or too "pretty," these soundscapes also are not "neutral" in essence. It's difficult to put into words the emotional resonance of this music…mysterious, haunting, and other usual descriptors seem both cliché and inadequate. More than anything else, what the astute listener will discern from Bowles' music is the sense of humanity at work under the surface, which is startling when one realizes the overt electronic nature of these six pieces, i.e. no easily recognized sampled elements, e.g. strings. This is pure spacemusic, whether one subscribes to the Jonn Serrie school definition (outer space) or the Stephen Hill version (inner space).

Describing the music itself is problematic because words are too limiting, yet this being a review, here are some snapshot observations. "Undulant Sea" with its ebbing and flowing washes and warm tones, imparts the evocation of being adrift on an ocean under a canopy of stars (the emergence of an interesting clacking percussive effect is not out of place, despite the sonic resemblance to a train rolling down the tracks), and the overall mood is somewhat sad, as if one is leaving something which one is fond of behind. "The Sweetness of Mist" is noticeably lighter at the outset, the pads and washes are relatively amorphous at first and the embracing comfort of warmth and serenity seem palpable. Isolated bell tones pepper parts of the track as if fireflies pop into and out of view. "Venus Rising" epitomizes celestial spacemusic with its wide-vista opening drones and washes, as if one were witnessing the planet come into view with the darkening night sky. Radar-ish blooping pulses lend even spacier evocations to the music, as if satellites were beaming their signals direct to you (but then, I'm from the generation which watched crude animation of satellites on black and white TVs with those same sound effects, as if satellites themselves made such noises in outer space). Even though the track is fourteen and half minutes long, the subtle variations that Bowles creates within the framework of the song make the time fly by (this is something she displays on every track, i.e. the morphing of each composition to evolve and vary over its playing time). "Into the Gloaming" begins in a brooding mood, with bass pulses amidst a lower pitched drone. At the outset, I was reminded of James Reynold's sublime piece "Leaving the Bonds of Earth" from his soundtrack to The Mind's Eye video. This piece shares the same sense of movement and more than a hint of shadow (this is the closest that Bowles gets to being "dark"). "Beneath the Radiant Stars" reverses the somewhat shadowy nature of the preceding track and installs a sense of gentle awe and wonder. Around the 2:30 mark, Bowles introduces an interesting rhythmic effect, comprised of a clicking sound married to electronic tonalities which over the course of the track's nearly eleven minutes subside into the background and occasionally make their presence subtly known. The closing track is "Nightwalk Across The Isle of Dream" and rather than detail it, suffice it to say that the title says it all.

Is The Shimmering Land Meg Bowles' masterpiece? I am reluctant to state that because her talent, in my opinion, is limitless. Surely this album represents a pinnacle of sorts for her. On the other hand, who knows where this artist is headed in the future. The Shimmering Land is essential spacemusic (and, as far as I am concerned, a top ambient release from 2013 as well). It's majestic but human, beautiful but not overpowering, warm but not cloying, inviting yet also somewhat intimidating in how it makes the listener feel (appropriately) insignificant in comparison to the wonders of both the universe and our own planet. One thing I can state definitively about both the CD and Meg Bowles is borrowed, somewhat strangely, from the last line of the film The Color of Money starring Paul Newman, when his character states emphatically to his antagonist (Tom Cruise), "I'm back!" Fellow ambient and spacemusic artists take note…Meg Bowles IS back!

The Shimmering Land is available from Amazon CDBaby and iTunes