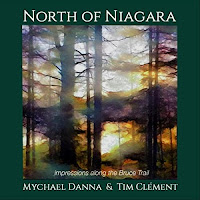 While remastering and remixing an album usually brings some measure of improvement from an album's initial release, I am sometimes skeptical about the degree of change such a process yields. Which is why, when I played the remastered/remixed North of Niagara (the 1995 masterpiece from Mychael Danna and Tim Clément) I nearly stopped in my tracks, literally. My first listening was done while driving and I almost did stop and pull over to the side of the road. I simply couldn't believe the exponential improvement - well, the word improvement is a vast understatement – that I was hearing. It was like listening to this amazing album for the first time! And that first time, back when it was first released, blew me away then. So, you can well imagine just how amazing this "updated" version sounds. Of course, it helps that the music itself is beautiful beyond my ability to put into words.

North of Niagara is part of a trilogy of albums that Danna and Clément recorded which were inspired by the landscapes of northern and central Ontario. Per the new liner notes, the two dubbed the musical style as "Canadian environmental music." North of Niagara was the conclusion of the trilogy and what a finale it is!

The twelve tracks vary in tone and mood but seldom stray from an overall sensation of reflection and contemplation. However, under that umbrella classification the listener is treated to the warm, pastorale reverbed piano of the opening "Cootes Paradise," the lush, sweeping washes of synthesizer on "Ravensview," the gold-tinted nostalgia of "Remember Summer," featuring Gene Goral's subtly bluesy accordion (yes, accordion on an ambient album!), and the wistful yet melancholic "Old Mail Road," with a guest appearance by Eric Hall on bassoon. And that is just the first four tracks! Next, "Mount Nemo" brings drama to the forefront via escalating synthesizer chords, which gain passion and volume, counterpointed, at the outset, by plaintive piano. Back in 1995, I was not as fond of this track due to the change in mood compared to the rest of the album. However, time has altered my opinion, mostly because the music does capture the feeling (musically speaking) of viewing and climbing the titular mountain.

This is a good time to point out that the inspiration for North of Niagara is the Bruce Trail which (and this is from the liner notes) "… begins at Niagara Falls and follows the Niagara Escarpment, the edge of an ancient shallow sea, for 880 kilometers northward to Tobermary." The trail is also Canada's oldest and longest footpath. Every song is named for an actual location along the trail and the liner notes display a map of the Bruce Trail, noting each location. Besides the tracks already mentioned, others include "Silent Lake," "Crooks Hollow," and "Crawford Lake." Woven throughout the album (not necessarily on every song) are some discretely used and well-recorded field recordings of nature (recorded by the artists), such as birdsong, lapping waves, and more. Regardless of how you may feel about embedded nature sounds on instrumental recordings, the inclusion of them here not only "belongs" from a thematic standpoint, but enhances the music, elevating it to a unique and transportive listening experience.

Besides Danna and Clément's shared duties on piano, synthesizer, guitars, and treatments, the album also features the artists mentioned earlier as well as Kim Deschamps (pedal steel guitar) and Paul Intson (bass guitar). Where each guest artist appears, their contributions are masterfully executed. One more thing to note is that initial release in 1995 (on Hearts of Space) featured digital piano. For this re-release, the piano tracks were re-recorded, this time on a 1983 Steinway B, making that instrument's warmth much more apparent.

Because I love this album so much, I will describe a few more of the songs. "Silent Lake" conveys its pastorale beauty via reverbed bell tones set against a background of crickets and birdsong, evoking resting beside the lake itself, perhaps as the sun sets. This is one of the softest tracks, floating in nature, and perfect to melt into. "Crook's Hollow" has a reverbed piano refrain that is more pleasantly reflective than it is somber/melancholic, with an assortment of ambient textures coalescing around the lead semi-minimal melody line. "Headwater Trail" is one of the more "pure" ambient songs as layers of synthesizers flow over a low-pitched rumbling texture and birdsong (loons?) deep in the mix, discernible but subdued. The closing "Lookout Point," is a lonely sounding track, with a sparse reverbed piano refrain that slowly evolves but never strays from the evocation of somberness as it winds down at the end.

If you already own the 1995 original, you should still buy this because it's such a stunning revelation of what remastering/remixing can do to an album. If you don't own the original…well, what are you waiting for? North of Niagara is one of the most haunting and evocative albums in the genre of piano/synthesizer ambience.