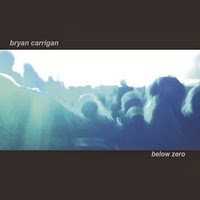 In the short span of four releases, electronic music composer Bryan Carrigan has established himself as one of the brightest rising stars in the chill-out, ambient, world fusion, and electronica genres. For his latest venture, below zero, Carrigan unfurls his sails and sets out for dub and chill-out land, eschewing (for the most part) his flirtations with world and new age from his last two albums. What stays the same from the past is Carrigan's adept layering of his mélange of keyboards and synths, incorporating both retro and contemporary musical and rhythmic elements as well as his knack for crafting infectious melodic refrains and catchy beats that entice toes to tap floors and fingers to rap table tops.

When I first spun below zero's opening tracks, what came to mind were the assorted A.D. compilations on Waveform, as well as a few other recordings on that ground-breaking dub/downtempo/chill label. The same high level of production quality on that label's releases is mirrored here by Carrigan. Nothing on below zero is cut-rate: synths sizzle, beats pop, and keyboard melodies caress the airwaves. Even though Carrigan's previous three albums (windows, focus, and passing lights) all exhibited a high degree of quality in production and engineering, on below zero he ups the ante to where this self-released album is the equal of any label release. This guy clearly knows his way around mixing and mastering technologies.

Another trademark component of Carrigan's music (unlike some similar artists, such as Ryan Farish) is how his tracks can be quite varied while still maintaining a noticeable Carrigan "sound."  Some artists in the chill-out and lounge genres craft one or two templates and stick with them. Carrigan re-invents himself over and over on below zero. First up on the disc, the title track slides out amidst shuffling dub beats, echoed piano, and spacy synth effects. "premise" glitters with shimmerings juxtaposed with an eerie, melancholic lead keyboard melodic refrain, offset by moody background ambient textures and anchored by a slow tempo dubbish rhythm. "new day" ramps the tempo, energy, and mood up to a pleasant level of daytime cruising in the sunshine (this is one of those great put-the-convertible's-top-down songs), with peppery synths, pumping synth bass notes, and a catchy keyboard refrain. "twist of lime" does an about face and veers into a deep, dark, downtempo cyber-jazz landscape, with layers of ambient keyboards underneath a bluesy trumpet line (a real trumpet, played by Carrigan himself), matched by a wailing synth co-lead and a funkified beat. Later in the CD, Carrigan dips his toes into semi-glitch waters on "runway" melding those contemporary elements with some quasi-Berlin touches (nice hybrid!). "detour" opens with a spooky series of sparkly synth notes, adding in a dub-like beat and thumping bass line - Carrigan has a knack for fashioning uptempo pieces that have a darkness embedded in them, music that has bite, tension, and a foreboding sense of moodiness. "frisky martini" brings back Carrigan's bluesy trumpet, but opens with cascading, twinkling piano and synth notes, before dialing in iridescent bell tones and mid tempo trap kit drum rhythms and bass. One of my favorite tracks on the CD is "tgv" which, if you don’t know it, is the acronym for the high-speed rail line in France. Obviously, this song moves at the fastest pace of anything on the album, and gone is any moodiness, replaced with an exhilarating feeling of great speed and giddy cheerfulness. The song begs comparison to Farish's work, but is not in any way imitative (it's much faster paced and, frankly, simply more fun to listen to than most of Farish's work, as well as densely layered with more synth elements).

below zero should be the final piece of evidence needed to cement Bryan Carrigan's place among the best purveyors of electronic keyboard instrumental music working today. His versatility and creativity apparently know practically no bounds (I wonder what he will tackle next?), his studio wizardry is as good as it gets, and his acumen when it comes to composing songs which combine memorable melodies and catchy beats is evidenced throughout his four releases. I mean, honestly, what more do you need to convince you that this guy is the real deal?

The album is available from the artist's website, Amazon, CDBaby, and iTunes.