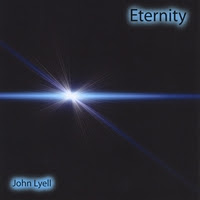 John Lyell may not be one of the more prolific artists in the spacemusic/ambient genres (this is his fourth album in 14 years, the first two being recorded and released with former fellow musician Brent Reiland), but he sure has honed his craft in just those few albums. Eternity, his second solo release, is even better than 2006's Dimensions, which was already quite impressive. While some artists in these two genres are able to crank out albums faster than their legions of fans can gobble them up, an artist like Lyell takes his own sweet time to get it right – and that's what he does throughout Eternity's ten tracks.

Before delving into the details of the music, I just wanted to clarify that, while I can see categorizing this as ambient music, it's because the song titles almost all reference space or astronomical images that I would personally list this as spacemusic, first and foremost, and I don't mean the broader sense of the word as Stephen Hill uses it, but the more exacting definition of spacemusic which includes seminal artists such as Geodesium and Jonn Serrie. That's not to say that ambient fans would dislike this disc – far from it. I'm merely emphasizing that this is music ideally suited for stargazing, either the real thing or simply laying back in a dark room, envisioning cruising through the cosmos.

I mention Geodesium (Mark Pedersen) and Serrie above because I think Lyell's music is the perfect hybrid of the two, without being overtly imitative of either one. Like Geodesium, Lyell uses pulses, tones, and electronic textural notes (not drums, though) to establish a rhythm, usually a slow cruising one (some of Geodesium's music is quite frenetic in comparison), and like Serrie, he wields a variety of sweeping synth pads and washes to impart a sensation of the vast reaches of space. Also, like both of the spacemusic pioneers, Lyell believes in a "friendly" and warm space. This music is seldom, if ever, dark or intimidating, but it's also never syrupy (as some of Serrie's mid-period releases were, e.g. Midsummer Century and Lumia Nights) and is very rarely energizing, unlike a larger percentage of Geodesium's uptempo tracks on any one of his CDs. Instead, Lyell opts for a mellow, subtle feeling of movement, if any at all, or else just a mild drifting sensation (e.g. on the second track, aptly titled "Eternal Drift"). There is one "peppy" track here, "Pulse of Destiny," on which fast tempo bass synth rhythms pulse under a variety of spacy synth pads amidst some tres cool, decidedly retro, sounds and effects.

What appeals the most to me about Eternity (and Dimensions, for that matter) is how relatively uncomplicated the music is; it carries no hidden agendas, no pretentions, yet it's not" simple" either in the sounds used or the manner in which Lyell layers his various synths. Another winning element is how easy it is to get into this music. From the first playing – hell, from the first track – I was captivated and couldn't wait to listen to the whole CD. Part of this is because Lyell eschews the more normally long track durations (normal for the ambient and sometimes spacemusic genres). The longest song, "Whispering Light," clocks in at just under 8 minutes, two tracks are under 5 minutes and five are in the six minute range. One might think this would lead to discontinuity of theme, but owing to how Lyell sticks to what I would describe as his "formula," just the opposite is true. Eternity is more cohesive a listening experience than some of the previously mentioned artists' recordings are, which is not meant as a knock on them.

All ten tracks on Eternity prove to be solid additions to the spacemusic canon, but I will admit a
a particular fondness for the following: "Eternity" and its pinging pulses, whooshing synths, and haunting keyboard melodies, the gentle percolations of "Star Seeker" with flowing cosmic synths, high-pitched sonar bleeps, and underlying quasi-vibe tones, with a base melody that perfectly captures the essence of "spaciness," and the soft sighing of somewhat mournful wafts of melody on "Dreams of Orion" blended with sparse, somber deep but warm drones and occasional twinkling star showers.

While in today's music purchasing environment of downloads (as opposed to brick and mortar stores), a CD's appearance has much less impact on drumming up potential buyer interest, Eternity is also the best looking of Lyell's previous recordings, and he made some great font and layout choices as well (if only more artists had his aptitude for that!). However, let's face it, it's still the music that matters most, and in that regard, Eternity is fantastic and, while it's a blatant cliché to state this, I consider it an essential addition to the library of any spacemusic fan. As one final inducement to pique your interest, the disc was mastered by Robert Rich at his Soundscape Studios, so you just know it's gonna sound killer on headphones.

The album is available from Amazon, iTunes, or CDBaby.
Posted by Bill Binkelman at 8:41 PM 1 comment: