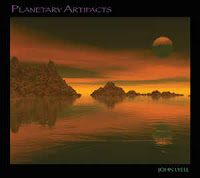 Over the years, some people have come to view spacemusic and ambient music as one and the same. I do not. Obviously, spacemusic can have elements of ambient music, but the opposite is not always the case, e.g. Aphex Twin's SAW II is only tangentially spacey. There are certain definable characteristics to what I consider to be spacemusic, which explains why the genre is nowhere near as populated with artists as ambient music is. Which brings us to John Lyell. Lyell may not be the most prolific spacemusic artist around (this is his fourth solo effort, his first being Dimensions which was released in 2006), but man, he sure "gets" it when it comes to recording "pure" spacemusic.

Spacemusic, to me, embraces its connection to outer space (and, perhaps, a nod or two to science fiction themes). It is in this realm that Lyell satisfies like only a few others do as well (most notably, of course, Jonn Serrie and Meg Bowles). It's not just his albums' artwork (which, by the way, has gotten better with every release; the cover of Planetary Artifacts is gorgeous), or his song titles (e.g. "Traversing The Portal," "Red Shift 2," "Another World"), but his overall musical aesthetic which beckons the listener to don headphones in a dark room (or outside under a starry sky) and do a serious deep dive into the universe that his soundscapes evoke.

Planetary Artifacts represents a subtle departure from his earlier releases, but not in a way that makes it any less enjoyable than those previous stellar works. Here, Lyell develops his more spacy persona, using a lot of electronic effects that, to me, bring to mind science fiction films, especially his fondness for a more retro style of synthesizers and textures. You know what I mean: the bloops, bleeps, whooshes, stuff like that. He layers all his various washes, pads, and effects with expert skill and utmost dexterity. While some tracks include bass pulse rhythms, the album is much more of a "drifter" than a "cruiser,"most notably in the latter half.

I have always appreciated how Lyell, unlike a lot of artists in this genre, tends to favor shorter tracks (relatively speaking). Only "Echoes Of A Distant Past" clocks in at over 8 minutes (8:32) and a handful are in the 4 to 5 minute range or so. I may be in the minority in this regard, but I like how this feature keeps the recording "fresh."

"Arrival" is a floating piece that somehow does evoke the titular reference, partly through subtle dramatic textures, which "feels" like one is arriving (maybe to a spaceport or jumping off point?). The rhythmic pulses at the start of "Traversing The Portal" perfectly capture the feeling of rapid movement, accelerating to cruising speed, as it were. On headphones, you will hear all these cool layers of synths, washes, effects, and this song reminds me why I feel in love with spacemusic in the first place – it just grabs you and whisks you away into a whole other universe. But Lyell executes this gently. His music is never aggressive, but it's also not what I would label as passive. This is why I make a distinction between ambient and spacemusic. Ambient music colors the background unobtrusively while spacemusic invites you to partake in it, as if you were on a voyage to the stars.

Lyell is really coming into his own and the more I explored Planetary Artifacts I realized that I was witnessing an artist maturing and evolving. He has become expert at knowing which synths to use, which sound palette to choose from, and how to execute it all to perfection. It helps, of course, that Robert Rich masters his albums, but mastering can only enhance great music, it can't make it great all by itself.

Whether the effervescent "Traversing The Portal," the stately "Red Shift 2," or the haunting "Echoes Of A Distant Past" Lyell is your able pilot as you stream through the cosmos. Later in the album, the mood gets ultra-spacy as if we are journeying to the outer rim, and even beyond. It's dreamy beyond words. My only regret with an album like Planetary Artifacts is I wish I had much more time to just listen to it and get lost in its explorations and mysteries. Simply put, if you are a spacemusic fan, this is an essential album to own.

Available at CDBaby, Amazon,  or iTunes
Posted by Bill Binkelman at 2:50 PM No comments: