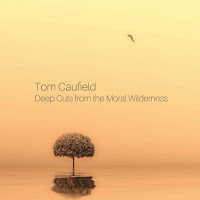 Deep Cuts from the Moral Wilderness

Guitarist Tom Caufield possesses a truly unique and particularly intriguing musical vision. Every album of his that I have heard reveals something new about his composing and performing talent. Even knowing this, though, I was still startled by his new album, Deep Cuts from the Moral Wilderness. While Caufield has never lacked for ambition, the departure from his signature styles is marked. The backstory of how this wonderful recording came to be is worth recounting. Performing at a candlelight service at a Presbyterian church in Los Angeles, he had the chance to see performances by cellist Judy Kang and violinist Alicia Spillias. In Caufield's own words " [I was] impressed by their artistry and enchanted by the ancient sound of strings, [so I] asked them to collaborate with [me] on an upcoming set, as [I] wanted to hear [my] melodies played with this burnished, haunting magic." A second violinist, Zach Paul, joined the trio for a performance at The Last Bookstore in downtown LA and the die was cast, so to speak. Before heading into the recording studio, a second cellist, Mark Edward Lewis, was added.

Deep Cuts from the Moral Wilderness (a cryptic title if there ever was one) flows forth with a sense of subtle vibrancy and artistic creativity, a fusion of the chamber music aesthetic with a minimalist approach to ambient guitar music that is, by turns, beautifully touching, hauntingly sad, and elegantly playful. The feeling of simpatico put forth by these artists who, if one were to be straightforward about it, are relative strangers, is a revelation of how quickly musicians can come to know each other and meld their talents into a cohesive visionary musical expression.

Long-time fans of Caufield's music may be surprised at how unselfishly he has surrendered the spotlight for nearly the entire 25-minutes of music on Deep Cuts… As a music reviewer, I have often extolled those "lead" artists of an ensemble who push their fellow players to step forward rather than he/she hogging center stage (in jazz, pianist Lisa Hilton is another shining example of this trait). It's not that Caufield's guitar mastery is absent on the recording, but more that it is relegated to a supporting role. Again, in his own words "I’ve moved the guitar to the back and brought cello and violin forward, letting them showcase the melodies, harmonies and movement. Instead of fretwork, I focused on arrangements, mood and sequence, aiming to create a half-hour ambient cloud, all cut of one cloth, but with enough detail and movement to also be engaging." Taking these sentences as a statement of the mission of Deep Cuts… leads me to conclude that he has succeeded in every way possible. There is an elegant simplicity to these six pieces, yet it is simplicity wedded to an emotional richness and deep resonance of feeling so that it would be difficult to not be intensely moved (as I was) when listening to this music (provided one has any appreciation whatsoever for the acoustic/neo-classical sound which permeates the recording).

Detailing the individual six pieces, there is the somber and mournful opening "Warszawa" (penned by David Bowie and Brian Eno, one of two pieces here not composed by Caufield, although the arrangement is his), with its plaintive mixture of strummed acoustic guitar and violin, followed by the relatively cheery, mildly uptempo elegance of "Fresh Astonishments," with a fusion of fingerstyle guitar and cello/violin which evokes sunlight and springtime. "Written on the Sky" (composed by Max Richter) begins with a semi-Mediterranean guitar, melding with a gorgeous cello/violin melody that evokes the feeling of fond remembrance, adding in some haunting sorrow in the conclusion. Delicate fingerstyle guitar likewise opens "The Nature of a Heart is to Yearn," and, as one might surmise from the title, here the mood is romantic, and the higher pitched violin melody imparts a subtle feeling of wistfulness which is counterpointed by the underlying sweetly flowing cello line. Reflection and somberness come to the forefront on "In the Realm of the Senses" with its deliberate, slow cadence of the strummed guitar chords and violin/cello melodies which echo each other. The concluding "The Weakness that Leads to Strength" is an emotional "wrapping up" of the themes presented in the previous five selections, with an evocation of a  mood that is both content yet also a tiny bit hoping for something more. The string refrain on this track is too beautiful to describe in words, as the key it's played in gets higher and higher, as if painting a musical portrait of the title, i.e. one becomes stronger through one's weakness.

Deep Cuts from the Moral Wilderness showcases Tom Caufield's maturity as a composer and his talent as an arranger for neo-classical music in a string ensemble setting, as well as, once again, displaying his performing talent and deft touch on his own instrument. I can't recommend this album enough – it's a stunning, brilliant work.
Deep Cuts...and all of Tom's albums are available directly from him at his online store. Some albums are also available from the usual online retailers, e.g. CDBaby and Amazon.
Posted by Bill Binkelman at 1:38 PM No comments: