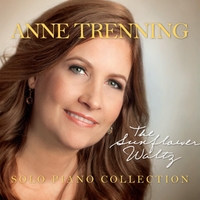 At its core, Anne Trenning's solo piano album, The Sunflower Waltz, is musical nostalgia, melodies from a simpler time when a simple sunflower seemed to radiate joy and beauty. This is not to say Trenning's music is "simple" in its essence, but instead, that the music is plainspoken with no subterfuge and little, if any, hidden agenda. These are straightforward songs, based mostly around major key melodies which conjure images of light, warmth, friendship and other positive feelings. When one adds in engineering and mastering by the estimable Joe Bongiorno (the album sounds great!), you get a complete package of solid musicianship, engaging melodies, and spot-on production quality.

"Max's Birthday" is the opening track and immediately sets the tone for the recording with a light-hearted and subtly joyful mood with adroit balancing of lower and middle/high registers. Next, the title track wears its waltz-like sound proudly on its musical sleeve. While the motifs are certainly influenced by those of waltzes, the tempo is dialed up a bit—not in any way that proves distracting, and in the bridge the speed slows down a bit before returning to the refrain, and that refrain has a catchiness to it that I enjoyed. The song is not purely classical in feel, as I detect a soft shading of rural Americana now and then. That Americana hint actually flows throughout some of the album's tracks. Images of small town bandstands on warm Sunday afternoons with children playing and adults relaxing seem to paint themselves in the air while I listen to tracks such as "Claire Of My Heart" and "Cowgirl Daydream" (which also displays a waltz motif as well, perhaps even more pronounced than the title track). Church music seems to be the main influence on "In The Gloaming Light" with its more sedate, measured cadence and somewhat stately melody. The next track, "Sing To The Lord," which one might expect to sound like a spiritual or hymn, is relatively subdued though with an undercurrent of joy and praise. "Backyard Dreamer" dials the energy down even further, perhaps referencing the title's notion of lying on one's back staring up at clouds drifting by. "Where Rivers Run" (the longest song on the album at 5:01) is one of the few songs that could be categorized as introspective and reflective although the emphasis on major key notes and chords keeps the mood away from somberness or melancholy. Instead, the pensiveness is warm and positive in nature.  A more downcast, for lack of a better word, mood is heard on the next selection, "Days Gone By" however the song balances moments of minor key solemnity with times when the mood lightens a bit, either through dialing up the tempo or switching to a major key. "A Prayer For The World" is cast in the same mold as "In The Gloaming Light" in that it seems to feature hymn motifs, although Trenning slows it way down and thereby injects heartfelt, touching drama, as if she is communicating her sincere desire to make the world a better place.

There are also songs which hew more closely to "traditional" contemporary solo piano, i.e. not showing any overt influences other the genre itself. "Just Fly" has a spirited tempo yet the repeated refrain heard in back of the lead melody injects something that keeps the thrust of the song from being "too" cheerful. "Fade To Blue" is lovely—a soft, gentle musical rumination on romance (at least that's how I hear it). Trenning's control of tonal shading and nuance on this track are stellar and subtle minimalism can be heard if one listens intently, as she allows the notes to breathe a bit, offering a counterpoint to the majority of the songs which tend to be more energetic.

The Sunflower Waltz contains sixteen tracks, most of them in the three minute range, and I must say the album breezes by quickly despite its total 53 minute playing time. By keeping song length short, Trenning shows her savvy side, i.e. change it up so as to keep listener interest piqued. It's a smart move, although these songs are all so engaging that even if you bumped some up to longer durations, I can’t imagine anyone regretting it. If you're looking for a solo piano release that will entertain you and might also stir some memories for you (owing to those numbers that evoke a sweet nostalgic remembrance), The Sunflower Waltz needs to be on your "buy" list.

The Sunflower Waltz can be purchased at CDBaby (more retailers to be added  later).

Posted by Bill Binkelman at 1:22 PM No comments: