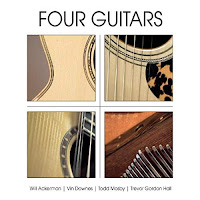 You'd likely have sky-high expectations for an album which featured instrumental music pioneer and Grammy winning guitarist Will Ackerman, joined by three of today's brightest stars in the same genre (acoustic guitar instrumentals).  Four Guitars unites Ackerman with Vin Downes, Todd Mosby, and Trevor Gordon Hall (all of whom recorded solo albums produced by Ackerman) bringing together their collective talents and artistic visions. Even if you do hold those sky-high expectations, prepare to have them not just met, but exceeded with ease. This is an album that even fulfills stratospheric expectations. I suspect that you can't bring four virtuosos together and achieve better results than what Ackerman, Downes, Mosby, and Hall have wrought with this fantastic recording.

All but one of the songs here is previously released as a solo effort by the composing artist (the original is the opening track, "August Light," composed by Todd Mosby and featuring all four playing together) but each of the "covers" is reworked, rearranged for one, two, three, or all four musicians. Because of this, there is no reason to consider these songs as being mere carbons of the previously released versions. Each of the ten covers reveals new aspects, new points of appreciation, and an overall exploration of nooks and crannies that were heretofore unheard.  As he has shown whenever he has guest starred on an artist's album, Ackerman (despite his stature) does not assume the spotlight any more than the other three players do. Instead, what the listener hears is a four-way symbiosis of talent, passion, deftness, and mastery of technique.

The overall mood of the album varies, although the more pensive aspect tends to dominate (which is typical for most of the recordings which Ackerman has helmed since opening Imaginary Road Studios many years ago). Ackerman's iconic "The Impending Death of the Virgin Spirit" is one of more powerful moments on the album, while the opening "August Light" (penned by Mosby and featuring all four guitarists) has a light-hearted feel to it, buoyed by a warm mid-tempo pace. Downes' "Departure" (with he and Hall play) does indeed sound like a musical image of walking out the front door towards a new adventure, but not in a rush, instead a laid back journey where the destination is less important the trip itself. "The Blue Hour" (penned by Hall and played by he, Downes, and Ackerman) combines fingerstyle with some well-played strummed chords and, at times, it sounds like the guitars are birds circling each other in flight. "The Meeting at the Window" is solo Hall and among the more reflective pieces on the album, while Mosby's "The Dolphin Song" (with Mosby, Ackerman, and Hall) sparkles with sunny notes yet maintains a mellow vibe as well, as if capturing (in music) an early morning stroll on a tropical beach and maybe even spotting one of the titular creatures off cavorting in the waves.  Another one of Ackerman's well known songs, "Hawk Circle," features all four of the players, and the tune never sounded fresher with the quartet finding new angles to both the quiet passages and more fiery eruptions of passion.

With ace engineer Tom Eaton performing his usual feats of engineering and mastering magic*, you just know that Four Guitars will sound exemplary, which only underscores the four guitarists' width, breadth, and depth of talent as well as their commitment to making the best possible recording that each of them has in them. They have succeeded, not just admirably (after all, what else would one expect with this pedigree?) but to a degree that we can only hope/pray/cajole that this is merely the tip of the iceberg with many more wonders from these four preeminent composers and performers. As Oliver Twist implored, "More sir, please?"

* Track 4, "The Impending Death of the Virgin Spirit" was produced and engineered by Corin Nelsen

Four Guitars is available for purchase at CDBaby, and Amazon
Posted by Bill Binkelman at 3:12 PM 2 comments:

REVIEW: Erik Scott - A Trick of the Wind 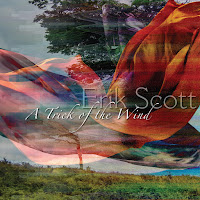 A Trick of the Wind

Erik Scott is both the reviewer's hero and villain. Hero because he envisions, composes, and performs (with guest stars) some of the most brilliant, imaginative, and beautiful genre-blending instrumental music on the planet. Villain because it's damn near impossible to convey in words his genius and talent. A Trick of the Wind actually eclipses his previous album, In the Company of Clouds, when it comes to taking music to heretofore unexplored heights of unique approaches to multiple musical influences, woven into a luminescent web that defies expectations of the listener, no matter how lofty they may have been.

While Scott made his living playing bass, in rock bands (creating a formidable resume in the process), he displays talent on a myriad of instruments throughout A Trick…including electric piano, organ, synthesizer, electric sitar, programmed percussion, vocals and three different basses: fretted, fretless and eBow. And while that is an impressive list, Scott brought along some top notch guests on the recording as well, including frequent collaborator John Pirruccerllo on steel guitar. Others contributing are a trio of vocalists (Larry Batiste, Bryan Dyer, and Sandy Griffith), Celso Alberti (acoustic drums, percussion, drum loops), John Luttrell (electric guitar), Andy Mitran (percussion), Jeff Pearce (guitar synthesizer) and Jeff Oster (trumpet and flugelhorn). Alberti appears on every track and the others vary, some are on a few songs, others make one memorable appearance (e.g. Oster's muted horns add just the right amount of hip jazziness to "Ghosts of Storyville" which, to me, evokes a funeral procession striding down the streets of the French Quarter in N'awlins. The shuffling beat suggests the slow, measured, yet rhythmic gait of the mourners, yet the song itself is not in the least bit sad!

I wish I had time to make detailed notes on every song, but standouts for me include the eerie yet gorgeous "The Wind Sings a Strange Song" (the track with guitar wunderkind Jeff Pearce), the somber title track which interweaves ambient sound-sculpting with a muted rhythm that gradually punches up the drama a tad near the end, "Solocca…Heart Wind" with mournful slide guitar, soulful wordless vocals, and a sultry rhythm anchored by bass and drum kit beats, and "A Wing and a Prayer" on which Scott displays a deft touch on the ivories and the organ, both on display in this quasi-chill out tune.

Needless to say, Scott's affinity for, talent on, and love of his main instrument, the electric bass, flows through A Trick of the Wind from beginning to end. I have to admit that until I discovered Scott's music (2014's Spirits), I never thought I could love bass as the lead instrument, but this rocker-turned-instrumentalist made me "see the error of my ways." Erik Scott is a true innovator and the only problem he will have going forward is finding new frontiers to explore and reveal depths of beauty and wonder. On the other hand, he seems to be doing just fine in the regard so far. Lead on, sir!

A Trick of the Wind is available to purchase on iTunes and Amazon.
Posted by Bill Binkelman at 3:02 PM No comments: