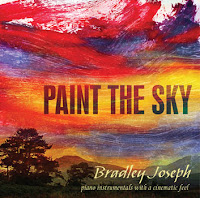 Paint the Sky is pianist/keyboardist Bradley Joseph’s (who hails from my home town of the Twin Cities) first release containing all original music in ten years…and boy, has he been missed. Joseph is one of the very best artists when it comes to crafting piano instrumentals augmented by the spot-on application of an assortment of keyboard embellishments, from standard orchestral accompaniment to more textural/new age elements. I remember one of my Wind and Wire (the magazine) reviewers, Judy Markworth, waxing eloquently about his 1997 release, Rapture. Now, it’s not like Joseph has been avoiding releasing music, but Paint the Sky is his first recording of all-original material after more than a few cover tune, standards, and holiday recordings. I can only hope that we won’t have to wait another ten years for the follow up to this exceptional album.

Joseph wastes no time whisking the listener away on the first track, “Inside the Stars,” with its uptempo, joyous lead piano melody accented by bouncy rhythms played on kit drums, thumping bass, and tambourine plus superlative orchestral strings. Not many artists know how to really open an album so that the listener is immediately grabbed. Bradley Joseph “gets it” to say the least. This is a “put the convertible’s top down and head for the open road” track if there ever was one! Lush strings and gorgeous new age synths kick off “Secrets of the Sun” with the piano melody here brimming with a blend of the ethereal and the romantic with a dash of wistfulness besides. The synth sounds remind me a little of Ray Lynch (where has he gone, by the way?), which from me is high praise. “Into the Big Blue” should instantly call Aaron Copeland to mind – it has the same BIG orchestral/cinematic sound to it, along with Copland-esque western rhythm and melodic motifs…one can almost imagine an huge expanse of vast prairie whirring past as one climbs on top a swift horse and races for the horizon! With just these three opening tracks, the price of admission for Paint the Sky is already justified…but we are far from being done, no sir.

Joseph quiets things down on “Your Eyes Say Goodbye” (as the title would suggest). A contemplatively romantic ballad of relatively minimal piano and restrained yet dramatic strings features a solo violin keyboard (which can be very hard to duplicate with keyboards) that is quite well done, in fact much better than, perhaps, 90 percent of the artists who try this. The song carries traces of sadness too…gentle, but noticeable. “In Dreams Awake” bears a strong contemporary classical influence, and some of you might even hear strains of Phillip Glass’ music (yes, the violins in this song are that exceptional as is the subtle use of choir which is also admirable). There is an exultant feel to the melody, but because Joseph maintains absolute control of nuance and shading the song never descends into overblown melodrama or bombast. As the track progresses, the mood and style shifts into a more identifiable new age motif, with more textural synths, bell tones and bell trees, and a more pronounced sweeping sensation of subdued grandeur. The Glass-like motif returns for the song’s finale. “Rainbow Fields” is straight-up pop instrumental magic, upbeat with just enough smooth jazz feel (without overt funk or urban sensibilities). When I heard this track, I remembered that Joseph spent time playing with Yanni and I can hear a little cross-blending of their two styles in this likable track.

I can’t detail the remaining seven tracks due to lack of space, but trust me that everything else on the CD is equally great, from a romantic solo piano number (“I’ll Wait for You”), another rousing cinematic/orchestral piece (“What a Time It Was”), a short, whimsical get-up-and-go solo tune (“Brave New Day”) to the ultra-soothing neo-ambient synthesizer-rich “Spirit of the Calm.”

Production and engineering is impeccable. Bradley Joseph has been at this for a long time and he knows what he is doing when it comes to maneuvering the knobs, sliders, and switches. His taste in electronic keyboard sounds is unassailable. A myriad of styles, moods, and tempos fills Paint the Sky with one aural delight after another. The songs within are true gifts bestowed on not just Bradley Joseph’s fans, who have no doubt hungered for a new CD of originals for years, but for newbies as well, who will no doubt immediately start snatching up his back catalog (or at least they will if they are smart). I have complete confidence stating that Paint the Sky will land on many “best of” lists by year’s end, provided the list-maker has any taste whatsoever. This album is a tremendous “I’m back” effort from Bradley Joseph the composer, and to that I say “Hear hear!”


The album is available through iTunes, CDBaby, Amazon, or directly from the artist.

Posted by Bill Binkelman at 2:59 PM No comments: