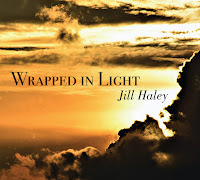 With the Covid pandemic shutting down mostly everything in 2020/2021, Jill Haley, a fantastic musical interpreter of the awe, wonder, and beauty of the National Park system, was not given the opportunity for another artist-in-residency position to draw inspiration from for her next album. Since she felt a desire to compose and record just the same, Haley turned inward for a wholly different, yet strangely appropriate, source of beauty to inspire her muse. In this case, Jill delved into the Book of Psalms, which provided her with a literate source of the beauty of nature. In fact, in the liner notes, each track's title is lifted from a specific Psalm and the Psalm number is listed along with the specific instruments played on each track.

I found Wrapped in Light to be Haley's most soothing, serene album to date, lacking the occasional invigorating or playfully dramatic song featured on her national park series of recordings. Another aspect that makes Wrapped in Light different is that it's her first album featuring synthesizer (played by her). Sometimes, the synth provides texture via washes, synth strings, etc. and other times, it's used more directly as a melodic keyboard instrument, e.g., the pleasant bell-like tones at the start of "Forest Sings For Joy." Since this is the first time I heard Haley play synth, I was quite impressed with her dexterity on the instrument.

Jill plays her usual English horn, oboe, and piano, the latter which (to my ears) features more prominently than on any of her other releases. Also on the album are husband David Cullen (guitar and bass) and son Graham Cullen (cello). Only two tracks feature "just Jill" while Graham plays on seven of the ten songs. His cello playing keeps getting better with each album, and, of course, David's guitar playing is his usual stellar work.

Even though the mood of this album (compared to, for example, The Waters of Glacier or The Winds of Badlands) is more serene, don't come here looking for somber or melancholic soundscapes. This is music suffused with warmth and, at times, palpable but subtle affirmation. It's just more low-key in essence than her previous work (although all her albums feature similar tracks, just not as pervasive as on Wrapped in Light).

The synth fills on the opening title track are spot on, and piano plays the most prominent role with a slight but discernible cheeriness, while "Clouds Rise" has David's fingerstyle guitar dominating at the beginning, again with some discrete synthesizer in the background. The first time I played the album, and this song in particular, I thought the music would take a dramatic turn due to the song's title, but any drama, either on this track, or throughout the album, is always subdued. As mentioned earlier, the bell tones/chimes at the start of "Forest Sings For Joy" are classic new age keyboard ones, which made me smile, taking me back to that great period of the genre in the late '80s and early '90s. I just wish that they were sprinkled throughout the track, not just at the intro. "Wings of Dawn" opens with some wonderful synth strings but Haley holds them in check so their effect does not overpower the album's overall sensation of peace and calm.

It shouldn't need stating that Haley's superb woodwind playing (on all but one track) displays her abundant talent, but her piano playing proves to be ear-pleasing as well, and it's featured on all but one song ("The Mountains Rose") which has synthesizer, oboe and cello. It's easy to see why Jill Haley appears on so many other artists' albums when it comes to playing oboe and English horn. She plays them with equal parts emotion and talent, but never in a melodramatic or showy manner.

I'm sure we all want the pandemic to be over soon for any number of reasons. I, for one, can't wait to see Jill Haley once again being invited to be artist-in-residence at another National Park. Personally, I'd love to see her gain one at Acadia on the coast of Maine, because it would be interesting to compare what she comes up alongside one of my all-time favorite recordings, that being pianist Jim Chappell's release, Acadia (1996). Having visited the park myself, I have no doubt Jill's interpretation would equally enjoyable.

Posted by Bill Binkelman at 9:48 PM No comments: 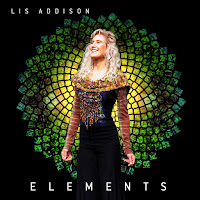 It's hard to know which to praise more on Lis Addison's album, Elements – her (as always) amazing voice, the flowing melodies, the catchy chilled rhythms, the intermixed world beat influences, or the overwhelming positivity of the lyrics. Tough choice, right? However, as this is Lis Addison were' talkin' 'bout, it's her voice, hands down. All the other aspects play a huge role in the fantastic end result, but it's Addison's siren-esque voice which swings from sultry to playful to comforting that takes Elements to the heights it achieves.

Elements is eight tracks of sublime music and beautiful vocals, with Addison singing both Sanskrit and English mantras. The respective tracks give thanks to (per the album one sheet)"…things we can’t live without but which we often take for granted; the Earth, Air, Fire and Water. Other elements, the Light of Love, the Green of Plants and the Wisdom to Choose Happiness can help us be joyful." Covid played a part in influencing Addison to record the album since all of humanity realized not just our interconnectedness, but also our base needs for survival, which are those listed above. Like so many other performing musicians, Lis also had to cancel several planned appearances in France, the United Kingdom, and Israel. So, when her muse came calling, Lis started recording. Elements is her fifteenth release.

It's unusual, from my perspective at least, to find an artist in Addison's genre of chant/world fusion (and possessed of such a beautiful voice) to be so adept at not just composing and performing music, but also the expert application of electronics and rhythms. She plays everything on the album and it's only her own voice (multi-tracked). Having found out that Addison earned a Masters degree in electronic music, it's easy to see where skill and talent with layering of keyboards comes from. She also produced the album. Put all this together and I defy you to not be mega-impressed.

While there is a lot of energizing music on Elements, it's never overpowering but it flows with a gentle sense of dynamism. While I do not practice yoga, I believe this would be great music for a routine, whether moderately active or some slower yoga movements as well, depending on which track one listened to. The opening "The Light of You" lights up the room with melodic rhythms and a delightful coquettish vocable (non-language specific open-vowel sounds) refrain under the main mantra. The sultry side of Addison's voice is featured prominently, swirling in the air like heady incense. Chilled beats come into play later in the song. "Breathing Green" is a superb slice of chill/lounge, mid-tempo percolating beats underneath some gorgeous multi-tracked vocals (English and Sanskrit mantras taking turns). The tempo of the beats increases on "Rhythm Of Earth" which pulses with primal energy (but, again, not overdoing it). Once again, Lis' use of wordless vocalizations (which are impossible to describe in words) is simply brilliant. "Mother Waters" shifts gears, but not distractingly so, as the song sways softly like a waltz or, I suppose a better analogy would like a stream flowing gently through the country. Her keyboard work here, on new age style bell tones, is exemplary! "Sister Wind" features her piano proficiency more front and center and the higher energy level derives not from any beats, but the natural fast tempo of the melody itself. "Horizon Line" probably comes the closest to more of a "pure" world fusion sound, owing to an assortment of ethnic percussion, e.g. tabla (actually featured on other tracks, too). Lis melds chill-out and world beat for the album closing "Choose Happiness," ending Elements with a strong note of positivity and an injection of joyous energy.

An artist possessed of amazing vocals and equally excellent musicianship working in conjunction with outstanding production, engineering/mixing, and flawless mastering (see credits for the latter two below), almost always results in a masterpiece. That's what Lis Addison delivers on Elements. But, more than that, during these trying times, we could all use with more comfort, peace, and, well, more hugs. When listening to Elements maybe consider it as a virtual hug from not just an amazingly talented artist, but a wonderful person as well. Bravo, Lis, bravo!

Posted by Bill Binkelman at 9:47 PM No comments: