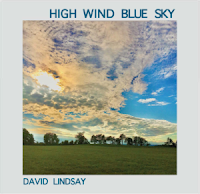 High Wind Blue Sky
Fallingfoot Records (2021)
I've been a fan of acoustic guitarist David Lindsay since his initial release, Nightbound (2015). After just three albums (this being his third) he is now one of my faves in the instrumental guitar genre. For me, his music is somewhat akin to Robert Linton's (meant as a huge compliment). Lindsay paints his musical portraits in subdued, muted colors with a nuanced technique and subdued melodies taking center stage on his gentle soundscapes.
High Wind Blue Sky could be seen as a subtle evolution of his somber previous works (the above-mentioned Nightbound and 2018's Last Passing Days of Summer) but it's a minor distinction, at least to my ears. There may be a slight change in mood, but not to the point that High Wind Blue Sky departs from this artist's strengths. Perhaps some of Nightbound's "moodiness" has shifted to a more "positive" frame of reference, but I still would never label this as "cheerful" music, although it could certainly be categorized as contentedly reflective.
As on his first two releases, the album came from the production team of Will Ackerman and Tom Eaton, recorded at (where else?) Imaginary Road where Eaton mixed and mastered it as well. Only the first song, the title track, features Lindsay flying solo. I suppose, in a perfect world, I'd have preferred one or two more solo offerings, which is meaning no slight to the guest artists sprinkled throughout the remaining nine other tracks.  Lindsay's talent can more than carry a song's emotional and melodic heft all by itself. Of course, if you have read even just a few of my reviews of Imaginary Road recordings, you know the esteem I have for the "usual suspects:" Eugene Friesen on cello, Noah Wilding on voice, Jill Haley on English horn, Jeff Haynes on percussion, Jeff Oster on flugelhorn, and Charlie Bisharat on violin, as well as Ackerman (guitar) and Eaton (bass, piano, bass. Their contributions certainly add perfect "seasoning" when they are present on any given track.
High Wind Blue Sky, as one might infer from the title, is a bit warmer and slightly less somber and melancholic as the previous two Lindsay recordings, but it still skews to the reflective side of the scale of instrumental music. In other words, I doubt any of the ten tracks will get your blood pumping or toes tapping, although the latter part of "For Margot" does ramp things up a tad, especially with Jeff Haynes' percussion towards the end of the song. However, it's a pleasant interjection of gentle cheerfulness, so the overall tone of the album is not derailed in any sense. Instead, it's a mild elevation of mood. "A Summer Breeze," the next song, returns to a more relaxed motif but filtered through a subtly sunny disposition of sorts. On "Sea Swells," both Friesen's cello and Haley's English horn impart the song with a gentle fluidity, and Wilding's vocals also contribute a dash of siren-call appeal.
Chalk up another solid offering from this relatively new and up and coming player in the acoustic guitar field. It would be a safe bet that the future holds more "blue skies" for David Lindsay.
High Wind Blue Sky is available from Apple Music & iTunes, as a download from Amazon, and can be streamed on Spotify and Weezer.
Posted by Bill Binkelman at 4:48 PM