REVIEW: DEBORAH MARTIN AND JILL HALEY - The Silence of Grace 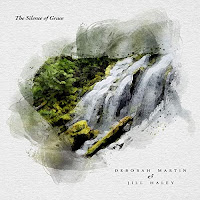 Being quite familiar with both ambient artist Deborah Martin's and multi-instrumentalist (in the contemporary instrumental/new age music genre) Jill Haley's bodies of work, I was particularly interested (to say the least) in what their collaboration would yield. Would it hew closer to Martin's electro-acoustic soundscapes or Haley's masterful flowing melodicism with an emphasis on major notes/chords? Well, to say I was surprised is an understatement. Seldom do two dissimilar artists join forces and "hybridize" their individual musical personas into something that, while not totally unlike their separate "voices," incorporates elements of each of their strengths to produce a melding that seems as if it came from a single source. But that is precisely what The Silence of Grace displays, i.e. a blending together of disparate elements which actually creates a whole new sound.

The Silence of Grace is one of those vexing recordings for reviewers like me, i.e. I try to both describe the music in (at least somewhat) concrete terms as well as evaluate it on its artistic merits. Here, the music defies easy "literal" descriptors, other than listing the instruments these two artists play. For the record, Haley plays English horn, oboe, percussion, and a Yamaha Motif, while Martin's list of electronics and keyboards contains the same Yamaha, as well as a Roland V-synth GT, Roland Integra, Spectrasonics Ominsphere, Taos drum, and percussion. What it all adds up to is, in a word, gorgeous. And I mean drop dead gorgeous. The eight track titles call to mind images that evoke drama, power, awe, and beauty, (e.g. "Verdant Sanctuary," The Stillness of Forest Bathing," "Water Flows of Clouds and Thunder") all elements which are present in abundance throughout the album.

The presence of a fair amount of orchestrations tilts the album in a classical/soundtrack direction, although for many I would think The Silence of Grace is still rooted in am ambient aesthetic. Haley's assorted woodwinds, which here she plays in a dissimilar style when compared to, e.g., her solo National Park series of releases, also contribute to the classical sound to the music. To be honest, more than a few times while listening to the album, I heard faint (or not so faint at times) echoes of Aaron Copland, albeit at his most subdued. Obviously, this is meant as a huge compliment, but it should not deter ambient/new age fans who do not enjoy classical music (either contemporary or traditional) from streaming this album and, if found to be to their liking, purchase it.

There is a gentleness of sprit at work on some tracks, such as "Verdant Sanctuary," with twinkling bell tones dancing over the woodwind melodies, accented by subtle ambient and orchestral accents. Pastorale elements are painted into "The Stillness of Forest Bathing" and one can almost imagine the sun shining through a canopy of tall trees. Here, and everywhere on The Silence of Grace, what stands out the most is how seamlessly Martin's electronics/keyboards mesh with Haley's woodwinds, almost as if they were the work of a single mind (as I mentioned earlier above). I would imagine attending the recording sessions (held at Dreaming Edge Studio in Vancouver, Washington) would prove mesmerizing for the listener, even possibly transportive.

Tip of the hat to mixing engineer Matthew Stewart (also at Dreaming Edge) as well as Howard Givens who mastered the album at Spotted Peccary Studio NW in Portland, Oregon.

I hope that The Silence of Grace finds the huge and appreciative audience it deserves. To say I was blown away by this collaboration between two artists whose careers I have followed for years (especially Martin, whose debut release, Under the Moon, introduced her to the world in the in 1995) may be understatement of the year. I have been lucky enough to meet them both in person and it is easy to see that their music is an extension of who they are as people and that the heart and soul they infuse in each note and chord is sincere and deeply rooted in an emotional core of artistic expression.

Click this link for purchase options via the Spotted Peccary label

Posted by Bill Binkelman at 9:57 AM