REVIEW: TRINE OPSAHL AND JOSEFINE OPSAHL - The Infinite between Us 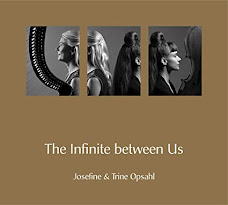 The Infinite between Us is the third collaboration between the mother/daughter duet of Trine Opsahl and Josefine Opsahl. Trine has gained widespread notoriety as one of the most accomplished Celtic harpists in the world and daughter Josefine is making quite the name for herself as a world class cellist, performing across a wide assortment of venues in Denmark and beyond, besides also composing her own music as well. Trine is one of the finest musicians in the field of harp therapy and has dedicated her life and her music in the service of easing the burdens of the terminally ill in hospices in Denmark. In essence, this mother/daughter combination exemplifies the best of current instrumental music as an expression of its limitless possibilities from both creative and healing perspectives.

My past reviews have extolled the amazing talents these two display when recording/performing together and certainly I could go on and on once more, delving into the beauty of their playing, the deceptive "simplicity" of their compositions (which are actually complex given the intertwining of their respective instruments) and the seamless way they coalesce into the singular whole of each of the album's twelve tracks. However, I'd rather just strongly urge you to go to your streaming platform of choice and give The Infinite between Us a close, attentive listen. Assuming you are a fan of harp and/or cello music, I have no doubt you will be held as spellbound as I was from the first time I listened to this album.

One of the best aspects of The Infinite between Us (as it was also for their first two recordings as a duo: Leaving My Silent Empty House (2013) and Unbroken Dreams (2016) is how captivating the music is when listened to directly, yet the music also serves as a most pleasant background choice to everything from housework to reading to moderate forms of exercise or yoga. The melodies unfurl effortlessly (which, of course, is a paradox since the talent required to play music as well as Trine and Josefine obviously requires an abundance of talent and effort), whether the tempo is somewhat spirited (as it can be at times) or luxuriantly soft and soothing. It's under the aforementioned direct listening that one extracts the utmost pleasure from the music, as far as I am concerned. Sit yourself by a window, perhaps on a partly sunny day with clouds lazily drifting by, and allow the music of Trine and Josefine Opsahl to wash over you, maybe eliciting a daydream or two from you…of your childhood, a past love, or a warm memory. I doubt you will hear a finer musical tonic for today's troubled world.

The Infinite between Us, and other their collaborations, as well as Trine's solo works can be found by visiting the Buy Albums page at her website.

Posted by Bill Binkelman at 9:35 PM