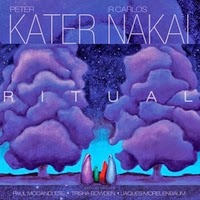 Legendary artists R. Carlos Nakai (Native flute, Eagle Bone whistle, chanting) and Peter Kater (piano) reunite for their first collaboration in over ten years and are joined by acclaimed reed player Paul McCandless (soprano sax, oboe, and English horn) along with talented cellist Jaques Morelenbaum and vocalist Trisha Bowden on the superb release Ritual. A wholly improvised recording, Kater states (in the liner notes) "It is an offering and invitation for us all to meet in this place of pure being-ness that transcends time, duality and concept. It is an expression of the totality and gift of each moment and the awareness that the experience of this journey is its own reward." Ritual is a thing of beauty, flowing from one track to the other, anchored by Nakai's haunting, lilting flute and Kater's superbly nuanced piano, but also featuring some major contributions from McCandless whose expert reed work is on display multiple times throughout the album. In fact, in some ways, McCandless is the "wild card" on the recording, giving an extra artistic "value added" to the songs on which he appears. Not to take anything away from Kater or Nakai–let's face it, they are each deserving of the years and years of praise that has been heaped on them. Just the same, McCandless fans, especially of his work in the landmark ensembles The Paul Winter Consort and Oregon should definitely seek out Ritual.

While some tracks have a drifting, meditative feel to them, almost dream-like at times, others contain drama and passion. The middle of the opening track "Meeting At Twilight" when Nakai, Kater, and McCandless gather together and pirouette musically round each other with celebratory joyfulness is one such occasion, although the opening and conclusion of the song are somber and haunting. "Standing as One" begins with a minimal piano melody over which Morelenbaum's cello sighs mournfully. As all the songs on Ritual do, this one evolves over its 8-plus minute duration, eventually folding in Nakai's soulful flute and Bowden's wordless vocals. It's worth noting that with only seven tracks on the album, yet a running time of 62 minutes, "average" track time is 9 minutes (in reality, track length varies from 6:54 to 12:34). Because of these longer-than-usual durations, the music has more room to breathe, to evolve, and to allow each artist to explore his or her own contributions. I greatly enjoyed this aspect of Ritual; it made the music come alive and kept any one element from overstaying its welcome. In addition, the improvisatory nature of the music also revealed the sense of simpatico that all the players have for one another as each one exhibits an instinctive feel for when to step into the spotlight and when to recede into the shadows. Yet, despite this being an improvised recording, there is no perfunctory noodling or overtly-flashy soloing. In fact, if the liner notes didn’t state that this was improvised, as opposed to composed music, you'd be hard pressed to tell. The only clue may be in how the unforced fluidity of the melodies comes across as organic in nature. "Invoking the Elements" has Nakai and Kater starting things off, the keening sound of the former's Native flute matched by the plaintive minimal piano notes by the latter. Gradually, McCandless joins in, but this is done so subtly, it's almost imperceptible. A lower register flute cries out at the onset of "Space Within" (Nakai is such a superb flutist), and once again Kater joins in with just a short series of notes at first before eventually playing a more pronounced lead melody line. On this track it's just the two lead artists, musical compatriots for years, each one dexterously flitting and flowing around the other - what a wonderful, intimate musical moment (later in the song, Nakai chants/speaks and you might get shivers up and down your spine, with the gravitas of the music matched by its beauty).

Do not make the mistake of dismissing or classifying Ritual as a simple, "relaxation" recording (although there is nothing wrong with that description in and of itself). There is something much deeper going on here, a melding of intelligence with heart, a musical hybrid that speaks to both the listener's mind and the listener's soul. The emotion (conveyed by the superb music) present throughout the album, the artistry exhibited by the musicians, the haunting quality of the improvisational melodies (regardless who has the lead) combine to make Ritual a recording of rare beauty and one which is equally enjoyable as a direct and attentive listening experience or played in the background (frankly, I would don headphones and soak this music up, savoring each piano note, each lilting flute melody, each plaintive reed accompaniment, as if lingering over a delicious meal). Of note, the album is superbly engineered and mixed by Kater with a great mastering job by David Glasser, and, as if the sublime music wasn't enough inducement, the CD is contained within some truly gorgeous artwork. Ritual will almost certainly land on many critics' Top 10 lists for 2014.

Ritual is available at iTunes and Amazon

Posted by Bill Binkelman at 2:00 PM