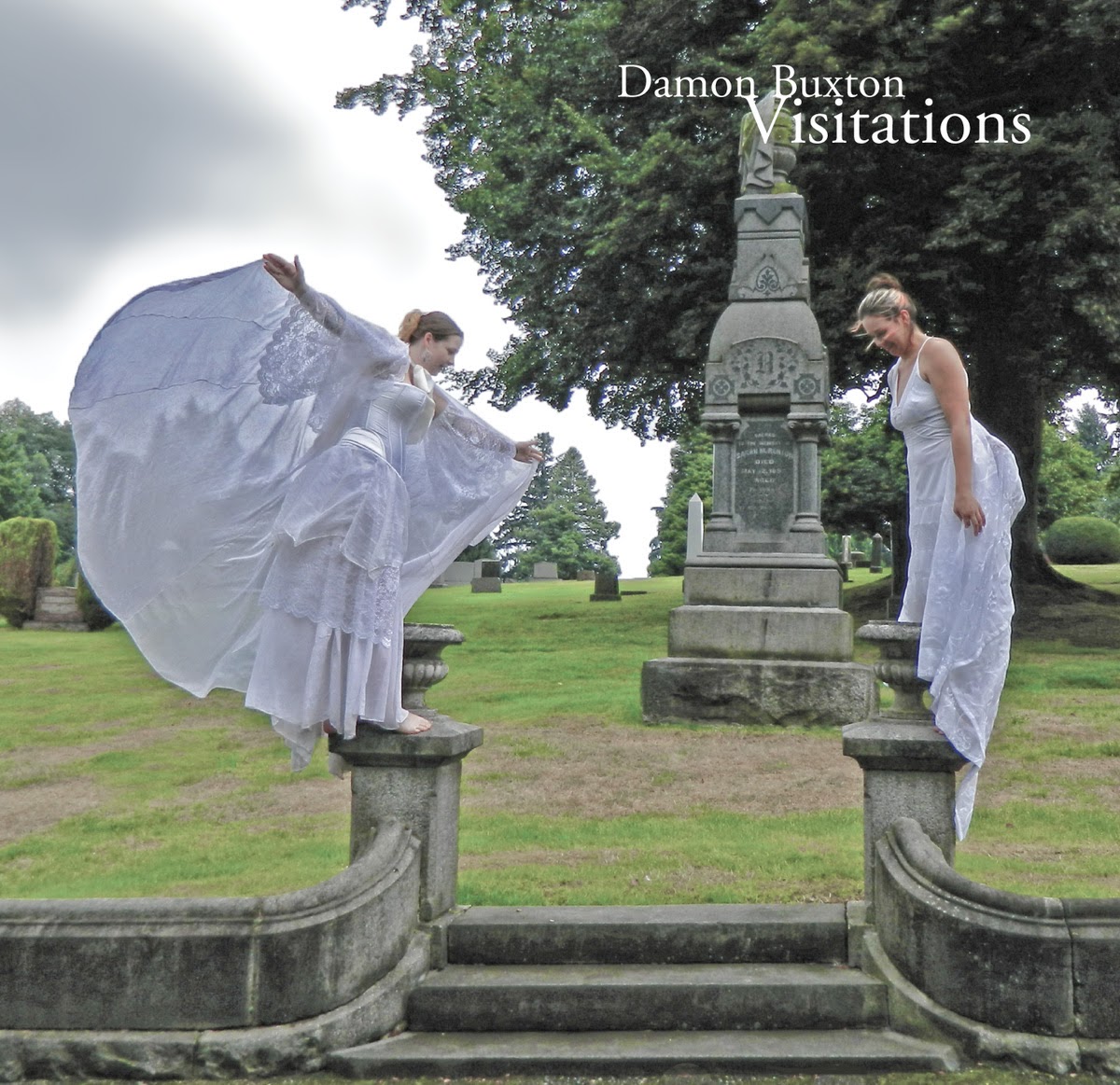 Damon Buxton vexes me as a critic even while he delights me as a listener on his latest album. Visitations. The artist's musical gifts and talent, spread abundantly throughout the recording, unveil themselves as richer and more complex with every playing (and I have played the album well over ten times before writing this review), but it is that same ten-plus playings that serves as evidence that something confounds the usually adroit writer in me. Time after time I tried, as a critic, to draw a bead on how to describe this man's music, but time and time again I was stuck with how to convey, in my usual loquacious manner, what his music was "like," so that you, the music-buying customer, would know whether it would be to your liking. At this point in time, I have surrendered to that goal, and will allow my critic to just sit back and enjoy the ride - and a fascinating ride it is on Visitations.

Before delving into some detailed words on individual tracks on the CD, I want to comment on the album artwork and the title. The two beautiful women, draped in white, are, I assume, meant to convey visitations by spirits (or at least that is my interpretation), yet the album liner notes are devoid of overt spirituality or "new agey-ness" and the music certainly doesn’t conjure images of angels or cosmic entities. I bring this up mostly to encourage you, the potential buyer of the album, to look past these images if they had prejudiced you to think this was going to be sweet, syrupy, saccharine-laced music. The music on Visitations is many things but is never syrupy or saccharine. With that said, let's look at the music itself.

A perpendicular comparison could be made to Will Ackerman's music, but that would be wrong because Buxton's music has more going on than Ackerman's more tone-poem, impressionistic approach. After much soul-searching the best phrase I can use to encapsulate Buxton's modus operandi is the introduction of dramatic tension in his pieces. Allow me to quote from an online source which describes it thusly: "Pleasurable excitement and anticipation regarding an outcome, such as the ending of a mystery novel." This is what I hear during the second track, "The Constancy of Angels (for Ash)" especially when Buxton changes key two thirds of the way through the track…there is a feeling of anticipation…of mystery…of unknowingness. It's so deliciously anticipatory. The track perfectly captures the uniqueness of Buxton's allure, the knowledge that something other than the usual may occur as he unfurls his melodies which revolve around what I refer to as circular refrains. "Rain" pleasantly assaults the listener with a cascading fast tempo downpour of notes, played with such dexterity that you are left wishing you could see Buxton play it live for the sheer joy of witnessing how his fingers could deftly navigate the strings and frets so effortlessly. The relative calm of "Sauternes" comes across as a delicious lull. The piece is not just sedate but relatively serene in its quasi-Mediterranean musings, like an aural aperitif. The title track features a wistful note progression that is so ear pleasing you want to luxuriate in it, enjoying its midtempo gracefulness, and then that "unexpected happens" when a series of upper register notes appears as if to say "yes, but…" "Transcontinental" conveys a sensation of travel with its tempo and its melody, while the playfulness of "Lilia Lani" (sounding almost as if it were played on a mandolin) speculates on a scene of unabashed frivolity. "Maledictions" re-introduces that feeling of tension, of something under the surface that seems to occupy a fair amount of Buxton's muse. It's not darkness, or melancholy, nor anything particularly sinister, but instead the "expectation" of the unknown. Call it "delicious anticipation" if you will. However, there is no need to wait for the payoff with Damon Buxton's guitar playing - the reward is right there in the listening, the appreciation of the nuance, the timing, the attention to detail, the juxtaposition of economy (few notes when called for) with a flurry of frenetic spell-binding technique. By the time the listener reaches the end of the "visitation" on the closing track, "Between These Clouds," she or he will feel both sated yet also eager to further explore the CD's fourteen tracks time and time again, peeking into each one's crannies, seeking that moment when magic happens (e.g. 4:30 on "The Constancy of Angels"); that instant when Buxton finds a musical "sixth gear" and the listener suddenly experiences a flood of euphoria thinking "Oh yes…that's it."

Damon Buxton is a rare, unique visionary on the acoustic guitar. Visitations (meticulously engineered, mixed and mastered by Corin Nelsen) is one of the best solo acoustic guitar releases I've heard this decade, and I believe I have yet to plumb its depths and find all it has to offer. It's a visionary effort by a consummate artist.

The album is available from bandcamp and iTunes.
Posted by Bill Binkelman at 1:19 PM