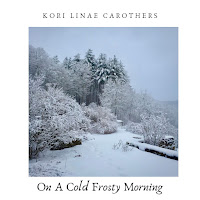 KORI LINAE CAROTHERS
On A Cold Frosty Morning
IRok’nNod Records (2022)
Kori Linae Carothers makes a triumphant return to recording and releasing music after an eight-year absence with her delightful and beguiling holiday album, On A Cold Frosty Morning. This is the ideal soundtrack for the run-up to the Christmas holiday, especially when you are seeking an introspective and subtle album for de-stressing at what is (for most people) the most stressful time of the year. Even though it’s been a long time since we last heard from Carothers, to say she hasn’t missed a step is a huge understatement. In fact, for this reviewer, her control of nuance and control of melody has never been better.

Recorded at (where else?) Imaginary Road Studios under the watchful gaze and adroit production of Will Ackerman and Tom Eaton, with Eaton performing his usual mixing and mastering magic, Kori is joined by the crew of usual suspects (see credits below) and, as if it needs stating, they all preform admirably. However, while only one track (“Gésu Bambino”) is a solo piano cut, Kori is front and center on every song/carol. In addition, her arrangements of the assorted traditional carols present on the album walk the fine line between note-for-note and imaginative yet still recognizable classics. Her originals fit in perfectly with the traditional carols, too, somehow managing to sound wintry and holiday-seasonal. Another thing to note is the exceptional job done by Tom Eaton on keyboards (six of the ten tracks) applying the subtle but oh-so-perfect amount of “coloring” to the songs. His skillful fills are as textbook as they could be, coloring the piano melodies with just enough atmospheric texture without once intruding. In fact, I did a double take more than once because I wasn’t sure if I was hearing perfectly captured sustain from the piano are actual fills. Well done, Tom!

The mood here, as mentioned above, is reflective and subdued. Don’t expect a rousing version of “Deck The Halls!” As a result, the album is best suited for late night (or even early morning) listening, especially in front of the fire/hearth (what can I say? I’m a romantic at heart).

There’s no sense singling out any particular track because every one of them hits the mark. However, I would like to point out Jill Haley’s exquisite English horn performance on “Coventry Carol,” as well as Charlie Bisharat’s beautiful yet somewhat mournful violin playing on “Memories of Christmas Past.” This does not, in any way, diminish the talents of the other players, but these two performances struck a deep emotional chord in me.

Over my more-than 25 years of reviewing holiday music, I believe that On A Cold Frosty Morning is one of the best “quiet” holiday albums I’ve ever heard. In addition, it is wonderful to see/hear Kori Linae Carothers recording once more after all these years. I know she has had a hard go off it since releasing Fire in the Rainstorm in 2015. I seldom “vouch” for an artist except for recommending her/his album, but in this instance, if you are looking for a holiday carol album to add to your collection, I know Kori would appreciate the support. She certainly deserves it! In the liner notes, she writes “I have always adored Christmas music. After 7 years of various trials and tribulations, I needed to express myself through my music and was encouraged by my family and friends to make this album.”

On A Cold Frosty Morning is about as perfect as a holiday album can be. It’s also a welcome return to recording and releasing music for Kori Linae Carothers. The album is ideal music to accompany your seasonal activities and merits my strongest possible recommendation.