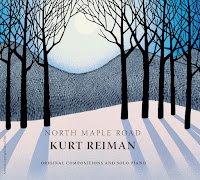 I was about three tracks into my first playing of Kurt Reiman's debut album, North Maple Road, when I thought to myself, "This can't possibly be his first album." Granted, the past year has seen a number of remarkable debuts by other artists, so maybe my surprise was just that I get so many solo piano recordings and to have one stand out so easily on the first playing, and also have it be an artist's debut! As Neo would say "Whoa!"


North Maple Road sounds like the work of a seasoned veteran composer and performer. Reiman's exemplary control of tone, nuance, shading, and tempo across an assortment of musical moods is not just admirable, but nearly textbook. He is helped, of course, by spot on mixing and mastering of the final product (the recording engineer is Michael Haas, and the mastering was by Haas and Chad Irschick) but even with studio wizards, it's the compositions and playing that makes an album special.

As I listened to North Maple Road a second and third time, I flashed on some of Jim Chappell's earlier works, most notably Acadia and Living the Northern Summer (although each of those feature piano and other instruments). There is the same melodic flow and lyricism of the main piano lines on Reiman's release as on those landmark albums (in my opinion). Also, just as Chappell can transition from bouncy and upbeat to meditative, relaxing, and nostalgic themes and motifs, so too can Reiman. While some of Chappell's music can veer over into a pop vein, North Maple Road, even at its lightest/liveliest, retains more of a new age/contemporary instrumental feel throughout. As a result, listening late at night, as long as the volume is subdued, will prove as rewarding as daytime playing.

The album's extensive liner notes (which are primarily a huge list of detailed "Thank you's") makes it abundantly clear this project was intensely personal for Reiman and bringing it to fruition was a dream come true of sorts. The personal nature of the artist's music comes through on each note and some song titles speak directly to a particular track's impetus ("You're My Friend," "Walk with Me," and "You'll Always Be Here with Me," for example). A few songs indicate that the artist is also inspired by the beauty of New England, where he was born, such as the delightful and subtly cheery opening song, "Sunrise over Narragansett Bay," or the nostalgic romance that flows through the title track. One of Reiman's strengths is his ability to never cross over into maudlin faux sentimentality, so that even a track like "Push Me Higher Daddy" (which could easily become unbearably saccharine in some artists' hands) stays emotionally restrained but unmistakably laced with a father's love for his child. "Evening Snowfall" hints at introspection and flirts just a bit with a gentle minimalism, but also softly glows like the embers of a slowly dying fire.

Besides the twelve enjoyable tracks, the CD is also graced with beautiful color photos in the liner notes as well as a warmly whimsical cover painting ("Snow Moon" by Sabra Field). North Maple Road heralds the arrival of an artist who I believe will become a major player in the field of solo piano music, and that is saying a lot when you consider how many recordings in that genre are released every year. Take a trip down North Maple Road and let Kurt Reiman remind you of how beautiful melodies can whisk you away to a better place.