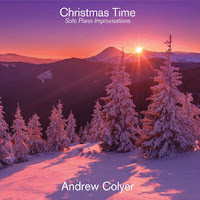 Christmas Time is a collection of, shall I say, interesting interpretations/arrangements of traditional holiday/Christmas music (some originals are also on the album) from pianist Andrew Colyer. Subtitled "Solo Piano Improvisations," the liner notes describe how these eleven tracks are 100 percent of the moment including, in the words of the artist, "warts and all." Four of the eleven tracks are penned by the artist and they include some of the best songs here. If you love a more standard version of carols such as "Silent Night," "Let It Snow," and "We Three Kings," you may want to give this a pass. I will say that the first time I played the album, I was unsure how I felt about it, but it grew on me once I surrendered my preconceptions of how these songs should sound. No such bias prevented me from enjoying the original numbers, all of which range from quite pleasant to downright beautiful. "Melancholy Holiday" is somber yet beautiful, a downtempo number that evokes the feelings of those who spend the holiday season alone and lonely. Lower register chords are combined with middle register refrains to impart of sensation of weight and drama while the upper register runs do little to "brighten" the mood, which is as intended, most likely. "A Night in Brooklyn" shares a slight sensation of somberness with "Melancholy Holiday" but it is less dark and more apt to depict walking through the streets late at night with snow falling softly, musing on the holiday and what it offers, both good and bad.

Colyer’s interpretations of the standards vary widely, but none as stridently so as "Let It Snow in New Orleans" and the title basically spells out what you will hear, i.e. a boogie-woogie/jazzy take on the secular carol, with a bouncy rhythm and an infectious joyfulness. "Laissez les bon temps roule" indeed, especially at Christmastime! Among the artist’s more interesting arrangements is what he does with a two-part (tracks 3 and 9) re-working of Vince Guaraldi’s iconic tune, "Christmas Time Is Here." Given a stark and minimalist interpretation, I first thought to myself "Where is the song’s childlike joyfulness and warmth?" Later on, I started viewing it as how someone my age, who first watched A Charlie Brown Christmas as a young boy might now feel about not so much the song itself, but the holiday, i.e. viewing it less with starry-eyed wonder and more as a well-worn glow of nostalgia. Part 2 of the "separated" piece hews closer to the original but still offers a unique take with a slight jazzier inflection. "Have Yourself a Merry Little Christmas" also gets a more somber, low-key interpretation, retaining the warmth of the melody but also creating some minimalist space between the notes.

Christmas Time may not be an immediately enjoyable holiday music album, but from my perspective, this actually works in its favor (as it did for me), as I slowly but surely came to appreciate not just Colyer’s imaginative improvisations, but also the mixing and mastering of the album (it sounds fantastic!). I suggest checking it out if you are in the mood for something both old and new!

Christmas Time is available at CDBaby, Amazon, and iTunes.
Posted by Bill Binkelman at 6:59 PM