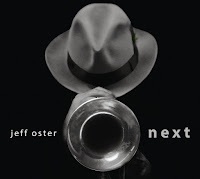 Next
Retso Records
Jeff Oster's Next (as in "the next big thing") is a masterful collection of tunes that blurs the lines between jazz, chill, funk and ambient/new age as if boundaries simply didn't exist. It is certainly one of the most entertaining albums of recent years, one that is polished to a chromium sheen by the ace production/engineering team of Ackerman and Eaton (I shouldn't have to give you their first names at this point), suffused with genuine warmth and humanity, and overflowing with a sense that the many musicians on the album had a great time recording it. And what a cast of players Oster assembled for Next! A huge tip of my hat to all of 'em: Chuck Rainey (bass), Tony Levin (bass), Michael Manring (fretless bass), Bernard "Pretty" Purdie (drums), Philip Aaberg (piano), Catherine Marie Charlton (piano), Ricky Kej (keyboards and bass), Vanil Veigas (sarangi), Nile Rodgers (guitar), Todd Boston (guitar), Taylor Barefoot (guitar), Scott Tarulli (guitar), Carl Weingarten (slide guitar), Shambhu Vineberg (guitar), Britt Thomas Brady (Fender Rhodes, guitar and keyboards), Melissa Kaplan (vocals), Jeff Taboloff (tenor sax), Noah Wilding (vocals), and Ackerman (guitar) and Eaton (keyboards, guitar, bass, percussion). Whew!

Even with all these sterling talents on Next, the unifying factor throughout the album's twelve tracks is Oster's flugelhorn and trumpet playing which, frankly, has never been better. Oster's control of nuance and tone is almost eerily perfect, it's just so sublime and fluid. It doesn’t matter what the music calls for, be it funky licks, soothing ambientish soundscapes, or blues-tinted jazz runs, he is not just up to the task but excels at it. Other than a very solid cover of the classic tune "I Can’t Make You Love Me" (made famous by Bonnie Raitt) and two other tracks ("And We Dance," co-written by the artist and Will Ackerman and "On Mother's Day," a compositional collaboration between Oster and Shambhu) Oster penned the remaining nine tunes which makes Next even more of an accomplishment.

For me, Next excels at one thing more than anything else—creating an atmosphere of laid-back relaxation without resorting to "relaxation music" clichés. Even when Oster and crew "kick it" in the funky opening title track, the expert way the song is mixed (spot-on laying of the drums and bass in the mix) brings the tune in as nicely chilled funk as opposed to a "tear the roof off the sucka" funk a la George Clinton. "Night Train to Sofia" washes over the listener with a flowing jazziness laced with a sense of bluesy longing. The drums and bass impart a noticeable rhythm which ties in nicely with the titular reference without directly aping the sound of steel wheels on rails. Kaplan's vocals cry out in muted fashion like a distant siren song, calling to her lover. Superb stuff! "Gardens of Varanasi" features Veigas' sarangi playing (an Asian string instrument) which casts a subtle world fusion shadow but the mood of the cut is more jazz-oriented by the ending with a mellow beat and Oster's fluid lead melody. Eaton's Fender Rhodes that kicks off "Turn Left at San Pancho" places the cut in a fantastic slightly-retro jazz vein (think vintage era Bob James) and once again, the solid drum/bass rhythm section lays down a solid groove over which Oster plays one of the album's catchiest refrains.

Track after track, Next delights with outstanding musicianship, sterling production, and some of the tastiest horn licks that Oster has ever committed to a recording.  "I Can’t Make You Love Me" is every bit as soulful and sorrowfully romantic as Raitt's version while "Ibiza Sunrise" sounds like you would think it would, unfurling slowly over a downtempo groove with layers of synthesizers, guitar and vocals and Oster's flugelhorn circling above it all like a graceful bird gliding over the titular island's coastline. "Avenue D" pulses with one of the more uptempo beats on the album, set aglow with Eaton's twinkling Fender Rhodes' keys while Oster's trumpet and flugelhorn intertwine with a graceful sense of subdued joy. Carefully placed environmental sound effects enhance the carefree nature of the song and Todd Boston's tasty guitar solo in the bridge adds yet another playful dash of spice. "The Mystery of B" slows way down with an ambient-like sensibility, an atmospheric blending of flugelhorn, bass, guitar, piano, and assorted keyboards that flows ever so patiently, slowly building to a mild elevation of drama. "Heroes" is the most dynamic track on the album with Charlton's piano and Taboloff's sax providing the opening mellow passage before the song comes to life with a more pronounced bass-heavy beat and percolating synthesizers over which Oster and guitarist Taylor Barefoot set things afire, eventually joined by Taboloff before the track ends. Next comes to a perfect ending with the restrained "And We Dance," a beautiful duet with Ackerman playing his trademark warm, introspective acoustic guitar and Oster blissing out on flugelhorn.

When I have to review an album as outstanding as Next, I worry that my praise will come off as gushing hyperbole, or even worse, sycophantic ramblings. However, I would be remiss if I didn't state that Next is flat-out amazing. Certainly this is Jeff Oster's best recording to date (which is no small thing in and of itself). But it's more than that. It is a landmark album that should hold almost universal appeal to anyone who has even a mild love for jazz or chill, as well as groove-oriented instrumental music. Next truly is the "next big thing." I wouldn’t want to be Jeff Oster, though, 'cause I have no idea how he will top this! It's hard to improve on perfection!

Next is available at Amazon, iTunes, and CDBaby.
Posted by Bill Binkelman at 10:51 AM

Bill,
Thank you SO much for your thoughtful review. I'm very proud of NEXT, and I am grateful for all you have done to help share it with YOUR fans.