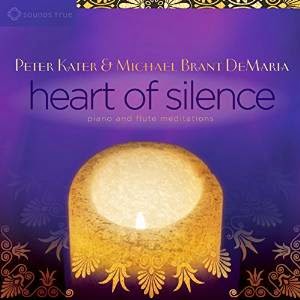 Michael Brant DeMaria (Native flutes) and Peter Kater (piano) collaborate on one of the most meditative releases so far in 2015, Heart of Silence. Wholly improvisational, the eight tone poems on the album showcase both artists’ talents for playing in a restrained, subtle yet powerful method. Regardless of the particular piece’s tempo or mood, the overall evocation is one of introspection, a traveling inward to explore the depths of one’s emotions, memories, and connectedness to the world and others.

The opening title track starts the album off in an extremely minimalist vein; both DeMaria and Kater develop the musical theme with utmost patience, delving as much into the silence between the notes as the notes themselves. While no detail is listed in the liner notes about the assortment of flutes DeMaria plays on the recording (other than the three individuals who crafted them), on this track, the flute is low-pitched, which lends an earthiness and a more pronounced primal sensation to it (it even apes the sound of a didgeridoo at times). The second cut, "Radiant Dawn," while opening softly, builds in energy and tempo over its seven-plus minutes, no doubt seeking to evoke the titular reference of sunlight flowing over the horizon and signaling the start of a new day. The shift in momentum from the first track is not jarring, but instead is handled fluidly by the two artists. DeMaria's short flute notes are matched by Kater’s fingers flitting nimbly over the piano keys. "First Breath" returns the music to a sparse vein and also re-emphasizes lower register flute tones. Sustain pedal on the piano notes underscores the mood of patience and even contains traces of haunting mysticism, while DeMaria holds some of those low notes so long that he sometimes achieves an almost drone-like sound. "Holding Space" continues in the same sparse vein, but the piano seems to take a more prominent position in developing the minimal melodic structure, which at times has a somber/melancholic aspect to it. There is an underlying tempo to this piece, but it’s quite slow, and as the song progresses, there is a lightness of mood intermixed with the darkness. "Tender Heart" develops the piano-led melody even more, although long gaps between notes are still heard at times. As the track develops, a more structured, less minimal motif by both instruments takes over and the music evolves into something more fluid. As befitting the song’s title, there is warmth and comfort in the music.

The last three cuts, "Timeless Echoes," "Midnight Dreaming," and "Awakening" all travel more or less the same basic path but with enough deviation so that a seamless integration of musical vision cohesion and variety of particular motifs and thematic approaches is achieved. Each song allows for ebbing and flowing, from sparse musical phasing to more flowing melodic content. "Midnight Dreaming" is particularly evocative, painting a serene yet subtly disquieting soundscape, perhaps conveying a troubled, sonic portrait of a sleeper's dreamscape.

Heart of Silence is obviously ideal accompaniment for massage (the album running time is one hour, likely intentionally), but I can also see it being used in situations such as stress-relief, background for mental activity (played at low volume) such as studying, or perhaps as a sleep aid for young children (you may want to program "Radiant Dawn" out of the sequence for that instance though). The excellent production and engineering quality would also allow listeners to enjoy it as foreground, not just background, music, although the lower register flute notes will require good speakers if the album is played above a quiet volume setting—those low notes are low enough that they may cause resonant distortion in mediocre speakers (understand, this is not the fault of the recording in any regard; I listened once through my computer speakers and some buzzing occurred, but not on headphones or decent speakers). DeMaria and Kater are very much simpatico with each other and in sync musically throughout Heart of Silence, each one displaying their unique gift for expressing the theme "less is more." It's a special recording, one to savor time and time again in order to fully appreciate the detail and nuance exhibited by these two musicians.

Heart of Silence is available from Amazon, iTunes, or directly from the label.