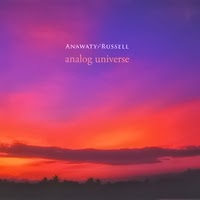 Analog Universe is available at CDBaby, Amazon, and iTunes.
Posted by Bill Binkelman at 6:57 PM