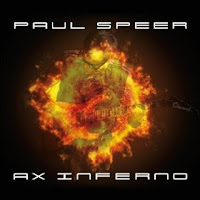 There is a scene in Casino Royale where James Bond is getting dressed for his big high-stakes poker showdown with Le Chiffre. He picks up a tuxedo jacket from the bed and glares at it. He struts into the bathroom where his fellow provocateur, Vesper Lynn, is applying make-up and exasperatedly claims "I already have a dinner jacket." She calmly replies "There are dinner jackets and dinner jackets…this is the latter." How does this relate to the new CD from guitar wizard Paul Speer? Well, yeah, Paul does wield his guitar with the same aplomb as James Bond does with his Walther P99…but here's what I am getting at. There are guitarists and there are guitarists…Paul Speer is the latter. There are plenty of guys and gals who can rip off stinging leads and thunderous power chords, displaying blindingly fast technique aplenty. However, there are much fewer who know that it takes more than flash and fire to impress a discerning listener. It takes discretion and wisdom to know when to strut and when not to; it takes brains and heart to compose killer hooks, catchy melodies, and infectious rhythms without making it sound commonplace or commercial. Paul Speer has all those qualities - and then some.

In an email exchange, when I told Paul that I appreciated what a great song writer he was and how he didn’t just thrown in flashy solos everywhere, he told me this: "Based on your comments, something about my playing and writing that may be of interest to you is how I structure what I do is influenced mostly by singers and horn players, not so much guitar players.  Many guitarists ramble on and on whereas singers and horn players need to breathe.  Hence, I feel they put more thought into each phrase.  Listen to what I play with that in mind.  I take breaths....."

Now, after all that, I'll start out this review by letting my inner child out - THIS ALBUM ROCKS AND ROCKS HARD! Whether Paul is playing with ace drummer Ron Krasinski or managing the beats and rhythms on his own, this baby will kick start your engine into high gear pronto. This music is lean, mean, and out for blood; a pulse-pounding mixture of instrumental rock, hard core electronic, progressive fusion, and floor-thumping techno. Ax Inferno is not what you listen to when you need to chill. Paul's guitar playing (and, by the way, he also plays bass and synthesizer) is a brilliant mixture of jaw-dropping but always tasteful (not aimless noodling) solos, solid rhythm guitar accompaniment, and melodies that grab you instantly, making you want to hit "repeat" the instant the song ends.

"Contents Under Pressure" makes a statement right out of the gate, as Speer fires off rapid staccato chords and Krasinski lays down a rock solid backing rhythm. Pulsing synth bass beats and keyboard blasts circle around superb lead lines that Speer lays down, juxtaposed by those chattering rhythm salvos. It's immediately apparent that Speer's solos and leads are pared to the bone for maximum efficiency with no waste whatsoever. Every pealing note soars into the stratosphere with a purpose. Ping-ponging synth chords (on headphones) pan from ear to ear dialing up the tracks' adrenalin rush to "11." This is only the first song! Rapid pulses of synth bass pepper the opening of "Accelerator" while Krasinski pounds away on the tom toms. Speers' lays down both a repeating motif and also soars with sustained echo notes and then tosses in chattering chords, adding even more fuel to the fire. If you play this album in your car, you may look down and see your speedometer read 100! "Tornado Warning" (the first track where Speer goes solo and the rhythms are programmed) shows that even without real drums, Speer can still rock the house. Here the mood is mysterious and eerie, with an undercurrent of swelling minor key synth pads and fast tempo drum kit rhythms with Speer offering up short, intense guitar leads. You can almost picture streaking across the flatlands of Oklahoma, in the heart of tornado alley, in pursuit of "the big one," grey skies threatening overhead and your blood racing with equal parts excitement and fear. Judicious use of sound effects (thunder, wind and a severe weather siren) only increase the palpable sense of danger in the music. Next, "Vortex" erupts with spacy synth effects anchored by seriously powerful drum work by Krasinski, followed by mournful sustained echoed leads by Speer.

The rest of the tracks include the subdued power pulses and flying fretwork of "Helion Prime," the pumping oomph bass rhythms and lush, flowing synths of "Powerglide (not to mention the delicious organ riffing alongside more superb guitar work), and the rock steady drum playing and stinging guitar fireworks of "Megatron" including some wah-wah wonder. To finish things off, Speer takes "Contents Under Pressure" and "Accelerator" and retools them for the dance floor, labeling each as the "Techno Mix." Take the already high energy of these two songs and now put a 125-140 BPM rhythm underneath it (for "Contents Under Pressure" while "Accelerator" clocks in a bit slower) and throw in a few more synths, plus strip out the drum track and substitute electronic beats.

Fans may have dreamt of an album like Ax Inferno after Speer released Hells Canyon with drummer Scott Rockenfield back in 2000. That was certainly a good album, but Ax Inferno is on an entirely different, and higher, level. Everything on this disc is polished to perfection (all booth tasks, i.e., production, engineering, mixing, were done by Speer). However, I’ll bet no one could have imagined the brilliance that Speer has captured on this recording. Seldom does this kind of electric guitar fire and fury get unleashed in such an accessible and, funny as it sounds, civilized manner. Paul Speer has brains, brawn and skills…kinda sounds a little like James Bond, huh?

The CD is available from Amazon.com, iTunes or from the artist.
Posted by Bill Binkelman at 10:32 PM