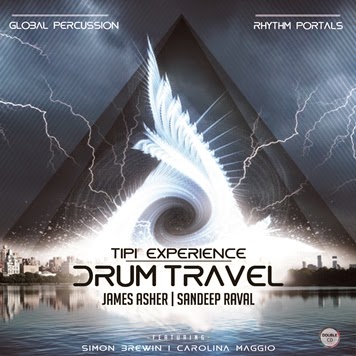 
James Asher has been at the forefront of world fusion music since releasing such acclaimed recordings as Feet in the Soil (1996), Tigers of the Raj (1998), and Raising the Rhythms (1999). These albums displayed Asher's impressive musicality and inventive compositions as well as his meticulous attention to detail in the production and engineering areas. In 2014, Asher (keyboards, drums, percussion, hammered dulcimer) joined forces with renowned drummer/percussionist Sandeep Raval and the two artists have crafted a genre-smashing 2-disc collection that will almost certainly set the world fusion genre on fire in the same way that Feet in the Soil did almost 20 years ago.

With two discs totaling 143 minutes of music and 20 tracks featuring a dizzying variety of musical styles, trying to adequately describe this recording is akin to critiquing a 10-course tasting menu at a Michelin 3-star (highest rating) restaurant in Paris. Imagine attempting to capture in words each nuance of spice, of sweet and savory, of fire and subtlety, the textures, the tastes, the visual appeal of the plating of each course.

Besides Asher and Raval, two other artists play significant roles on the album: Simon Brewin on guitar and bass and Carolina Maggio who contributes her fantastic vocals and plays charango (an Andean string instrument of the lute family). Other musicians contribute on congas, violin, bansuri, melodic, cahon, sarangi and vocals. Brewin and Maggio are clearly the most involved alongside Asher and Raval, though.

Disc 1 features 14 tracks and kicks off with "Fugira," a spirited vocal track (I believe sung in Spanish or something similar) backed by jazz guitar and a mid tempo beat established by percussion and trap kits drums. The song has a samba-like feel to it, propelled by Asher and Raval's assorted beats, while Brewin unfurls some tasty electric guitar licks in the bridge and Maggio's vocals are fiery and passionate. The instrumental "Takita" features a wide assortment of drums and hand percussion galore all working up to a frenzied energy. "How It Feels," slows things down. Maggio picks up her charango as well as singing (in English). While the song has a sad, despairing feel to it, her beautiful voice is mesmerizing. Asher's and Raval's percussion work lends a distinct world flavor to the song but the rhythm is subdued so as to not interfere with the melancholic nature of the song itself. "Bring On Brasil" changes gears with a festive bossa nova influence. This instrumental track bursts with powerful percolating rhythms from Asher and Raval - the perfect soundtrack to a frenzied street dance in Rio during festival. "Drums for the Dragon" plays like Japanese taiko meets Caribbean funk while "Chili Pickle Chaser" pumps up the late '60s jazz fusion influence with chugging organ and funky guitar licks aplenty while trap kit drums lay down the groove. "Neptune Skank" sprinkles on sensual reggae spices with blistering electric guitar in the bridge and "Pappadoms from Persia" marries traditional Indian instrumentation (esraj and tabla) with a contemporary beat which propels the track into high BPM territory along with soaring wordless vocals. The last track on disc 1, "Seven Veils," is a 14 -minute excursion into Indian tabla rhythms and sultry melodies merged with bluesy guitar and psychedelic, swirling, echoed chants, winding down to barely a whisper by track's end.

Disc 2, subtitled "Tipi Experience," "deepens" the rhythmic journeys. It's a mellower collection of tracks with different musical influences. Despite its title, "African Angel" comes across more like a straight-up folk song (Maggio sings in English on this track) with a dash of world beat rhythms played on hand drums. "Los Cuentos" is a Peruvian-influenced instrumental with a pan pipe lead melody accented by percussion, drums, and charango. "Hey Wanaina" changes the focus to Native American and the track features chanting and Native drums The song has a joyous, celebratory feel with a great chorus of singers accompanying Maggio later in the song. After that song, the album takes on a different feel entirely; one might say it becomes more serious. That doesn't mean sedate necessarily, as fast-paced rhythms are present much of the time until the last track. Moods range from darkly introspective with dramatic tension ("If The Earth Could Speak") to a frenetic build-up of tension and power (the Cajun-flavored "Accelerando" which ends in an orgasmic explosion of drumming ferocity). The album concludes with the 30 minute "On The Outbreath" a slow, sensual, rhythmic Indian meditation, featuring an assortment of ethnic percussion, bansuri flute, vocals and an underlying drone. As a counterpoint to much of what has come before it, this last song is decidedly slower and deliberately paced - a brilliant ending to the album which allows the listener to "power down" so to speak.

James Asher and Sandeep Raval prove themselves to be master drummers par excellence throughout this album. Carolina Maggio's and Simon Brewin's talents flesh out the rhythms with superb contributions. The four artists combined have created something extra special with Drum Travel. As flattering as my descriptions of the music on this album may be, trust me when I say that hearing the music is light years better. Magical, mystical, mesmerizing and memorable - Drum Travel is all that and so much more. Hands down, this is one of the greatest world beat recordings in the history of the genre.

Drum Travel is available at iTunes and Amazon
Posted by Bill Binkelman at 8:58 AM