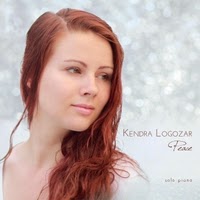 
Kendra Logozar (wife of fellow pianist Michael Logozar) treats thirteen carols to a soft-as-the-falling-snow treatment on Peace, an impressive solo piano effort for this promising performer. My esteemed colleague, Kathy Parsons, stated of the album "Kendra Logozar has created a true work of art with Peace - one that will be a favorite Christmas album for many years to come." and I completely agree with her. Holidays are stressful enough and we can never have enough "peaceful" music to help us unwind and that is what Logozar delivers throughout this heartfelt and gentle recording. Even on normally rambunctious tunes, such as "Deck the Halls" or "Jingle Bells" or the spiritual "Go Tell it on the Mountain," Logozar manages to dial back the "oomph" and emphasize the soul of the composition. I imagine the notion of a "quiet" take on "Jingle Bells" might surprise you and even make you think "Yuck." But trust me, under the artist's carefully controlled nuanced playing, the carol is recognizable yet somehow soothes the listener instead of making her or him get up and dance. The same thing with "Deck the Halls" on which Logozar touches the keys with an almost inhuman grace and gentility.


Now, obviously, Peace is meant to be a late-at-night listen, when the kids are asleep with the anticipation of Christmas morning coloring their dreams. Playing this at a dinner party with all the hubbub and noise would be counter-intuitive to its purpose, which is to help the listener(s) relax and indulge in the beauty inherent in these time-tested seasonal classics. While Peace is not as minimal as George Winston's December, it is equally conducive to quiet times curled up in front of a fire, hopefully with a loved one, and pausing to reflect on the season (something we could probably all do with more of), allowing the patient playing of Logozar to carry away at least part of your trials and tribulations.


Kendra Logozar does right by all thirteen carols on the album, including a duet with husband Michael on a particularly haunting and evocative "Carol of the Bells" (the one time on the album when some fireworks truly fly - these two really get into it as the piece progresses). The last two tracks, "There's a Song in the Air" and "The First Noel," close out Peace with a sedate sensation of calm. Peace is a wondrous assortment of carols performed with heart by a talented pianist who understand that there is enough bluster in winter winds - let the music comfort you like a cozy blanket when the cold winds blow.
Peace is available directly from the artist, CDBaby, Amazon, and iTunes.
Posted by Bill Binkelman at 5:41 PM