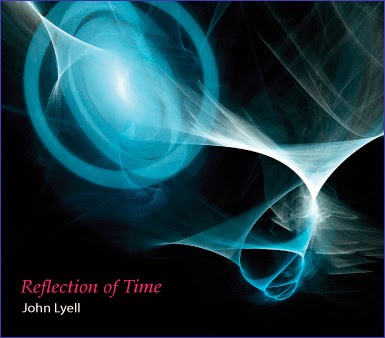 Minneapolis ambient artist John Lyell purposely tries to take each successive album in a slightly different direction (he cites Steve Roach as an influence in this regard, not just his music but his always-morphing style as well). It didn't take long during my first listen to Reflection of Time to discern that either. Lyell's previous release, Eternity, was a soft-edged space exploration with an emphasis on waves of flowing electronic melodies, sometimes punctuated by gentle pulsing rhythms. Not dark by any stretch of the imagination, it was closer to the spacier side of Jonn Serrie's early work. On his newest recording, Lyell morphs that formula somewhat and invites the listener deeper into the inky-black backwaters of the galaxy and sometimes out into the space between galaxies where nothingness beckons with a sense of both awe and forlornness. Lyell's music is still not what I would label as dark or "scary," but it's more moody and evoking of the loneliness and isolation of deep space travel (or what I might assume it to be).

One of the most distinct differences musically is a shift to less of a melodic-based approach and more of a textural one, as well as the use of retro electronic "SF" effects, e.g. burbling synths, static noises, spacy sounds. Yes, Lyell's deft touch with shimmering bell-like tones is still present but so are many instances where the electronics, devoid of overt musicality, are also at center stage. It's to Lyell's credit that he deftly manages to blend these apparently disparate elements into a cohesive whole, somehow mixing them into an alchemy that evokes both golden age science fiction films with their synthesized sounds and early electronic music releases (from artists like the late Michael Garrison or Patrick Gleason or even Larry Fast, perhaps) as well as a contemporary sensibility with top notch production quality. Lyell's discs have always sounded good and Reflection of Time is no different, especially since it was mastered by Robert Rich, although credit is also due the artist himself who handled production and engineering.

Another thing that I give props to Lyell for is how he avoids the ambient/spacemusic pitfall of extra-long tracks, i.e. individual songs of over 10 minute duration. Apparently, he favors brevity over track duration, of which I am particularly grateful. The album contains eight tracks, averaging about 7 minutes or so in length.

On "The Deep Unknown," we are off cruising into the blackness with a repeating pattern of sonar-esque blips (like a repeating radio signal) set off against a series of shadowy synth washes and whooshing effects that sometimes echo off into the distance in a forlorn fashion. Things brighten a bit on "Above the Stratos" with static-effect noises intermixed with retro-synth SF-themed sounds, blipping and bleeping, and ethereal chorals. It's hard to "describe" the overtly SF/computer-like synth effects, but you will know them when you hear them. The ebbing and flowing static in the background might grate on some folks' ears, but likely only if you are listening on headphones. On "Dreaming In Sine Waves" we are settled in for a dreamy smooth passage through deep space with twinkling bell tones and lots of whooshing sounds and an occasional burbling series of synth effects. The loneliness of isolation is conveyed in "A Far Away Place" with more background static-like sounds (almost akin to waves continuously crashing on a beach but distorted) and the barest hint of melodic content in the way of a occasional synth wash or keyboard tone. "Space Ethereal" features reverbed bell tones and gentle bass rhythms pinging into the emptiness, cradled by vibrato chorals and occasional synthesized sighs of relief.

Three more tracks flesh out the release: "Dreaming In Sine Waves 2," "the title track, and Crossing the Barrier." All three take elements already presented in previous songs and shuffles them in how they are used, so that no one track sounds too much like another and yet all eight songs have definite cohesion. "Crossing The Barrier" is the sparsest piece on the album; it's more or less a layering of drones and tones gently easing the album to its warm, amiable conclusion.

I admire how John Lyell has not settled into a successful groove and has opted to allow his spacemusic to evolve over these last three releases. From a purely personal standpoint, I don't know that I "like" Reflection of Time as much as I did Eternity (his previous recording), but I recognize how much care Lyell put into his new album and applaud him in that regard. Reflection of Time is perfect for late-night imaginary stargazing or maybe star-tripping is a better phrase. This is a great soundtrack for a dark-room imaginary excursion to Orion's Belt and other distant destinations out among the comsos.


Reflection of Time is available from iTunes or CDBaby
Posted by Bill Binkelman at 2:06 PM