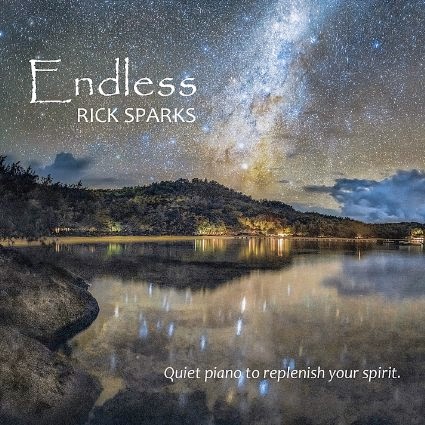 As sometimes happens to me, I find myself amazed at how professional and accomplished some artists' first or second releases can sound these days. It's almost as if these recording musicians come out of the gate as seasoned pros! Such is the case with Rick Sparks on his second release, Endless. The cover states "Quiet piano to replenish your spirit" and that statement sells this album short by a landslide. Sparks' use of keyboard textures and embellishments, to accent his mellow and warm piano lead melodies, is way ahead of many of his contemporaries, to the point that I was shocked to learn that this was a homegrown effort (all the arrangements are his, and he composed two of the album's ten tracks as well as handling all the production). Even the cover artwork (a gorgeous starscape from photographer Ben Canales - I want it on my office wall!) is excellent as are the choice in fonts (and boy, that is rare).

Sparks has chosen an interesting and varied collection of tunes for the album. There are covers of songs from Gordon Lightfoot and fellow pianist Bill Leslie, as well some traditional covers, and some religious hymns. This diversity points to Sparks' formidable versatility as well as his cohesive music persona which manages to pull all of these considerably disparate sources together into an ear-pleasing musical whole. Well done! According to the liner notes, four of these songs are Scottish in origin and one is Irish, and while echoes of those two countries can be heard, I would not classify any of this as "world music" due to how expertly Sparks' integrates that element into his arrangements. This speaks loudly of Sparks' unique music and artistic vision - the tracks always instill a sense of peace and quiet in the listener.

Star-shimmering synths kick off the first track, a cover of Gordon Lightfoot's "Beautiful" alongside a mellow piano lead which soon leads into a nicely sampled guitar accompanying the piano and accented by sparse echoed synth textures. This is as close as you can get to classic (and I do mean CLASSIC) new age music from the golden era of the late 80s and early 90s. What a fantastic opening track - it had me hooked on the first playing! Next, the traditional "Dream Angus" (which does carry a hint of either Scotland or Ireland in the melody) comes to the listener with a soft, gentle piano melody, later embellished with subtle strings - just gorgeous. The injection (later in the song) of some lovely chorale samples is spot on and elevates the beauty of the tune even higher. Sparks' first original is next, the title track, and it's a subtly somber tune but continues the wonderfully serene piano playing which imbues the entirety of this recording. Once again, strings are applied with utmost discretion and proficiency - Sparks should hold classes on how to layer in synth strings to many other artists. A lilting flute accompanies the artist's piano on "Be Thou My Vision" and, as much as I hate being a broken record, once again Sparks' sound echoes so much of what made new age music so great two decades ago. However, don’t misunderstand me - this is not an homage disc or a throwback. Sparks' has a (now) unique way OF blending his piano leads with synths, but the sound itself is wholly contemporary in that these are fresh melodies.

As the album progressed, I kept waiting for a slip-up on the artist's part (hey, I'm a cynic), but Sparks' kept performing admirably, with a veteran's artistry, track after track, from his cover of Bill Leslie's "Portree" (wonderfully subtle synth pads underneath the piano - and those bell tones!) to another original track, "At Rest" (another nicely layered in flute line as well as discrete chorales), and a truly beautiful version of "Loch Lomond" on which the integration of superb chorales brings to mind no less a comparison than to the artist who exemplifies that kind of music, the estimable Bill Douglas.

Endless is, to me, one of the top albums of 2014, which is saying a lot because there was a lot of great music released this year. However, Rick Sparks just has "it," that indefinable quality attributed to fantastic music, and there's no sense denying it. Endless is one of the more "complete" albums I've received in a while - gorgeous graphics, flawless production, and virtuoso performance. Pick up a copy (or download it, but you'll miss the artwork - trust me) before it sells out!

Endless is available at CDBaby, Amazon and iTunes

Posted by Bill Binkelman at 8:50 AM