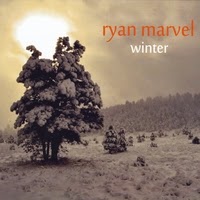 Pianist Ryan Marvel lends his touch to some "marvelous" arrangements of traditional holiday carols, both secular and spiritual, on the aptly titled Winter. Marvel is a gifted artist and an imaginative arranger, something immediately apparent on the opening track, "Three Good Kings" on which "We Three Kings" is lightly brushed with subtle (and occasionally, not so subtle) jazz influences - not enough to make the tune unrecognizable, but with new wrinkles nonetheless. While not every carol/song is treated to this amount of improvisational embellishment, Marvel's goal seems to be painting each selection with just enough extra flourish to distinguish his music from cookie-cutter carols. In every case, the arrangement never detracts from the beauty of the original and, actually, it sometimes enhances it, such as on his lovely rendition of "O, Holy Night." One carol that stands out for brazen originality and features the most imaginative arrangement is "Little Didge Boy" which, of course, is "Little Drummer Boy" and yes, it features didgeridoo (played by Doug Powell). Now, I admit hearing the growling and barking of a didge set against the melody of "Little Drummer Boy" can take some getting used to, but it's more than a "novelty" take on this classic, as Marvel also jazzes up the heart of the song as well on piano.


Marvel shines brightest when he takes a quiet approach to an interpretation which allows his nuanced style of soft playing to come to the forefront. "Walking in the Air" carries a hint of melancholy. In the middle of the song, Marvel (per the liner notes) pays homage to George Winston's ostinato motif. The haunting melody perfectly captures the image of a twilight walk through falling snow - at least for me it does. Marvel's sole original composition is "Winter," a somber piece that clocks in at 8+ minutes that sheds its minimalism part way through and turns to a more classical-oriented style.


Besides Powell's didgeridoo, Heidi Mausbach plays cello on an evocative version of "Coventry Carol" while flutist Leslie Anne Harrison's lilting flute transports the listener to Ireland on the medley track "Aran Boat Song/Holly and the Ivy." The transition from the sorrowful "Aran Boat Song" to the lively "Holly and the Ivy" is seamless - much to my surprise.


Marvel's last three selections are a wonderful trio of classics. First is a superb rendition of "Have Yourself a Merry Little Christmas" that captures both the magic of the carol as well as its sadness. "Silent Night" receives an appropriately respectful treatment and is quite minimal at times and always sincerely reverent. Appropriately, the last song, "Auld LangSy ne" sends us into the New Year. Once again, Marvel plugs into the heart of the song, playing the tune in a particularly plaintive yet also optimistic fashion.


Winter is a winner, pure and simple. It's an album meant to be enjoyed with loved ones during the quiet times of the holiday. Bravo, Ryan Marvel, bravo.
Winter is available directly from the artist or at CDBaby.
Posted by Bill Binkelman at 5:25 PM