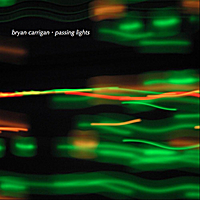 Electronic keyboardist/synthesist/rhythm programming expert Bryan Carrigan is garnering a reputation for crafting great electronic music – well-layered, flawlessly produced and engineered and laden with abundant hooks and infectious beats so that the tunes are damn near irresistible. I reviewed focus, his world-beat infused electronica release, for Zone Music Reporter. passing lights takes Carrigan's music into a more overt EM landscape, seamlessly meshing elements of chill-out, synth-pop, dub, rhythmic ambient, and retro EM into another tasty assemblage of ear candy. passing lights is custom-tailored to be driving music (hence its title, I'd wager), especially late night urban excursions along neon-lit city boulevards, although it could certainly make rural highway drives a pleasant occasion as well.

"balloons" kicks the CD off in fine fashion with echoed blips over a bed of retro buzzing textures, frenetic beats, thumping bass, and finger-snap accompaniment, all of which come before the lead melody emerges - a dramatic, soaring keyboard line that evokes traveling at high speeds. "the flickering" opens with shadowy, warbling noises, but soon becomes a bass-heavy snare/high hat dub-esque affair, meriting comparison to all those classic Waveform "A.D." releases from way-back-when. "shades" features shimmering tones of different types and pitches against a backdrop of downtempo thumping bass beats and shuffling rhythmic textures. "ten times two" lightens the mood and introduces subtle world music flavors via wooden flute and tuned metal percussion, but again a heavy bass beat anchors the music solidly in the electronic genre, which only intensifies when the lead synth line is introduced. The mood is somewhat melancholic, if, that is, energetic, driving beats can ever be said to be melancholic. It's a unique wrinkle, one that Carrigan delves into now and then.

"centipede" carries a hint of Asian or Indian spice, once again via sampled ethnic instruments as well as how the melody is crafted, while "you me equals we" revisits some of the same sonic elements first heard on "the flickering" but twisting them into something new nonetheless. Dub rears its head on the midtempo beat-fest "destination now" but it's dub spiced up with some world music touches that sound either North African or Middle Eastern to my ears, as if it this music could be heard at a cyber café located in a desert village town square. "drive home" dials down the beats to a slower tempo and heads into a jazzy vein with a swirling muted trumpet line along with what sounds like a Fender Rhodes electric piano (tweaked a bit, though). There are two more tracks still to come - the frenetic quasi-Berlin styled "hidden spaces" (which reminds me of Can Atilla's album Omni) and the sparse non-rhythmic closer, "beginnings" (interesting title for the last track!) - a drifting, ambient piano number, accented with swelling electronic drones and textures underneath the echoed piano notes. Being the only cut without beats, it's as if the artist is saying "Here, finally, is some time to catch your breath." It's an appropriately quiet, subdued ending to an album that revs the listener up and takes him/her on a ride across a rhythmic expanse of musical marvels.

As I write this review, I am also poised to write my review of Carrigan's brand new release, windows, which sees this talented electronic music artist head in yet another distinctly different direction, that being a merging of electronic-based new age and ambient music. It seems that Bryan Carrigan's bag of tricks is like Hermione Granger's handbag - bottomless and filled with wondrous items.

The album is available directly from the artist (sound clips available here as well) or at CDBaby.
Posted by Bill Binkelman at 10:27 AM