REVIEW: KEVIN KELLER - the day I met myself 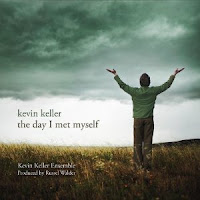 It's difficult, to say the least, to capture in words my reaction to Kevin Keller's masterful recording, the day I met myself. Part of this dilemma is that I have far less experience reviewing contemporary classical music, which this likely will resemble for many readers of my reviews (and likely is best categorized as such). The other aspect, though, is the same reaction I had to Kevin Keller's (and his ensemble) earlier work, in absentia. This is intensely emotional, personal, and intimate music, not easily deconstructed into components or interpreted into analogies or metaphors. The sheer weight of the music, its gravitas if you will, is staggering if one really delves into it. It's perhaps like investing oneself in therapy (which I have done). Traveling the road that the day I met myself lays out for the listener is a journey that is at once scary and rewarding. On the other hand, from a more superficial perspective, i.e. on the mere surface, the music itself is so beautiful, so lovely, so intriguing that even a casual listen will likely draw a person into an uncommon listening experience.

As on in absentia, Keller is once again joined by his ensemble, although this time minus percussionist Tomm Roland. Present on the CD are Christa Robinson (oboe, English horn), Courtney Orlando (violin), John Pickford Richards (viola), and Clarice Jensen (cello). Keller plays celesta as well as piano. Every accompanist plays an important role, albeit their relative impact varies track to track.

Every one of the ten pieces has a single word title, addressing a state of mind or a state of being. Musical mood and tempo vary, although if one were to listen to the entire album in one sitting, the variation would be less obvious unless one intentionally listened for it. This cohesiveness is difficult to concretize but easy to absorb. There is no overriding "theme," but instead a trip through a cavalcade of emotional expression and musical motifs. "Innocence" has an air of melancholy to it, presenting a paradox to the usual titular aspect of joyfulness and exploration. "Unfolding" carries a hint of excitation and enthusiasm, albeit tinted by the inclusion of minor key notes which leans the impact in the direction of subtly unsettling. Keller's celesta tones, in particular, stand out, counterpointing the oboe and plucked strings. "Evanescence" is a more emotionally neutral track, on which Keller's piano and the ensemble play as a unit more than on other selections – it’s one of the more straightforward chamber-esque pieces here. "Searching" (one of favorites on this disc) conveys the titular reference through a rhythmic theme carried by plucked strings as well as a sense of urgency via Keller's piano. However, what makes this track so interesting is the slightly macabre cast it has, almost gothic at times. The piano refrain makes me think of walking down shadowed hallways in a deserted mansion, where furniture is draped with dust-layered sheets. It's this incredibly rich imagistic component of Keller's music that makes the day I met myself so rewarding a listen (well, that and the considerable performing talent of Keller and his ensemble members, of course).

"Remembering" will evoke comparison to Mychael Danna and Tim Story for fans of those two artists – the selection shares a tragically sad minimalism with those two, especially with the repeated string refrain set against the piano. "Beckoning" opens in an almost ethereal mood, but soon veers into somberness and even mournfulness. While the mood is downcast, the music itself is so achingly beautiful that this juxtaposition may pose the question "How does one come to 'love' music that is so rife with pensiveness?" Yet, that is the ultimate riddle of the day I myself.

I have not done my usual adequate job of properly describing the music on this CD, which is what I try to do in my reviews. As I stated earlier, the day I met myself is beyond mere written description. It's probably obvious that unless you at least tolerate (and better yet, enjoy) classical music, you may not warm to this CD as I have. There are no synths here, and the intent to create a chamber music-like aesthetic is easily apparent. However, what Keller is doing with his music transcends the conventions of classical and chamber music (and that is not meant to belittle either genre). Keller is digging deep into the human experience on this album. It's beautiful and also somewhat intimidating, in the sense that if you open up to this music, and allow it to penetrate you, if you give yourself over to it (in the words of "V" from V for Vendetta, if you "commit to it"), listening to the CD will be a revelatory experience. And if that isn't enough of an endorsement for a recording, I don’t know what is.

Sound clips available here. The CD is available for purchase at iTunes, the artist's website, Amazon.
Posted by Bill Binkelman at 2:43 PM