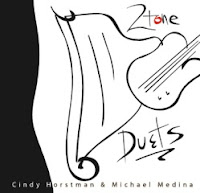 It's hard to believe that the fantastic music on Duets comes from only two instruments and that those two instruments are seldom heard in a duet setting. However, when electric harpist Cindy Horstman and electric bassist Michael Medina play together, the results are immensely accessible, warmly engaging, and hugely entertaining. This is the first CD by the duo since their 1997 release Tutone and I sincerely hope it won't be as long a wait for the next one (granted, Cindy and Michael released other albums during that gap which featured guest artists, all of which come recommended by yours truly). I have been a big fan of Horstman and Medina since that 1997 release, but even I was caught by surprise at the sheer excellence of their latest effort. Duets is one of the most likable discs I have heard in 2012, period.

While only two of the ten tracks on the CD are originals, of the remaining "standards" that the pair have chosen to record, only three are what I might label as "expected" (the inclusion of "America the Beautiful" as the concluding track, while the song itself is a classic, it's certainly not heard on many albums – at least the ones I am sent to review). Those three more recognizable ones are "Scarborough Fair," "The Water is Wide," and "Danny Boy." Horstman's and Medina's great taste in picking the other selections is quite impressive.

Starting right out of the gate with something unexpected, Medina takes the lead melody on the duo's interpretation of the Earth, Wind and Fire hit, "That's the Way of the World." The two artists give the famous song a laid back yet jazzy spin, and uncover the optimistic, uplifting "guts" of the song's lyrical message without having to include vocals. The next track is "My One and Only Love," a soft, romantic, ballad that smolders gently so that the passion of the piece is closer to a low and steady burn than a red hot love affair. It would make a great slow dance tune, and I can almost envision the setting – a dimly lit cocktail lounge high above a metropolis where the tinkling of ice in glasses dissolves into the background as you and your paramour gently weave your way across the dance floor to the mellow notes from the bass and harp. Man, I wish I was in that scene!

Horstman's harp takes over the lead duties on "Scarborough Fair" which drapes the melancholy nature of the song with a slight jazz accent without sacrificing the emotional weight of the composition. Cindy's fingers flit effortlessly across the strings – she is such a talented harpist and her playing style is unlike any others on this instrument (of those who I have reviewed over the years). "Septembro" (which is sometimes subtitled "Brazilian Wedding Song") was made most famous by Quincy Jones and here Medina returns to the lead. His slow bass notes take this tune into the same gentle, romantic vein as "My One and Only Love" but it has an even softer and more romantic feel to it than the former track. Midway through the song, he spins off into a slightly more edgy, overtly jazzy direction, but Horstman keeps the song grounded in a slow tempo groove through her sedate yet oh-so-pretty accompaniment. "Remembering" is one of the two originals on the disc, this one composed by Horstman, who takes over on lead (Medina's bass is barely there at times, providing sparse rhythms underneath the melody). As the title would suggest, the piece is reflective and introspective – it's one of my favorites on the album.

The remaining tracks include a nice rendering of the hymn "The Water is Wide" which maintains the heartfelt nature of the song while infusing it with extremely subtle jazziness, a splendid take on the tried-and-true "Danny Boy," capturing both the heartache and the beauty of that traditional Irish song, and the other original (co-written by both the artists), "Bonnie Brae" on which the artists liven up the proceedings – not a lot, though, just a smidgen.

I can't sing the praises of this CD enough. It's a sheer joy to listen to Cindy Horstman and Michael Medina, two artists at the top of their game throughout Duets. The album mines a unique sonic landscape, i.e. a place where soft (not smooth) jazz, folk, and pop music meet and come together. There is nary a misstep on this album (yes, even "America the Beautiful" sounds great!). Duets is ideal late-night listening, especially for hopeless romantics like this reviewer. So gather your honey to your side, pour two glasses of wine (or whichever libation you enjoy), light some candles, queue up the CD or mp3 player and commence cuddling. You can thank me in the morning!

The CD/download is available at CDBaby, Amazon, and iTunes. Listen to samples at Cindy Horstman's website.
Posted by Bill Binkelman at 3:54 PM