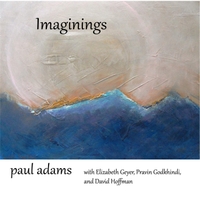 Imaginings, the new album helmed by multi-instrumentalist Paul Adams, is a delicious smorgasbord of tasty musical treats from across the globe, although that doesn't properly describe the unique approach Adams and his guest stars (see below) have applied to the world fusion genre. There is genre-bending, and then there is Imaginings. On the latter, the genre isn't bent, it's intertwined and intermixed and spun out into a glorious multi-hued comforting quilt of musical goodness, embodying an assortment of moods and evocations but all of them aimed at enriching the listener's well-being. In the accompanying one-sheet with the album, Adams states "We need diverse elements working together. We need playfulness, growth, and perhaps a pragmatic sense of mysticism to get us there. Imagination." Amen to that!

Joining Adams on the album are long-time collaborator and close friend, David Hoffman (flugelhorn and conch shell), as well as Elizabeth Geyer (piano) and Pravin Godkhindi (bansuri flute). Adams plays (get ready for it!) flutes, Chinese hulusi (a wind instrument), electric sitar, hang drum (a tuned metal percussion instrument), percussion, guitars, and piano. Without taking anything away from the other three artists, Adams' virtuosity and proficiency on all these instruments winds through the album's twelve tracks like a river coursing through a serene landscape. I have been a huge fan of this talented artist since I reviewed his album The Propertyof Water in 1997 and hopefully he is finally going to garner the praise which has more or less eluded him up to this point.

Moving on to the music itself, Imaginings encompasses a broad range of influences, but the presence of Godkhindi's bansuri and Adams' own sitar playing give the tracks where those instruments are predominant a distinct Indian sound, obviously. There are also moments where Native (wood) flute is emphasized. However, what makes this album so special is how these surface influences are sometimes peacefully overcome by the diversity within many tracks, e.g. the whimsically titled "Panda Bears at Breakfast" starts out with haunting Native flute against minimal piano accented with shakers, and you would think you are in for a serene meditative Native fusion peace—but ever so slowly other elements are introduced. The piano takes on a slightly jazzy undertone and before you know it, a shuffling funky rhythm has emerged and what sounds like a Hammond organ to me is churning away with a jazz refrain underneath the flute, which now and then flits about with unrestrained liveliness. It's a very cool transition. "Giggles and Grooves" opens with birdsong and, yes, a child giggling, and one might muse "hmm, a new age soundscape coming up" but then sitar comes into the picture, albeit played in a distinctly bluesy way, and as the track builds, one realizes that all these musical (and natural) elements are coalescing into something whole that is unlike its parts. Hawaiian-esque guitar and tuned percussion only serve to elevate the tropical spice in the piece. Wordless vocals and flugelhorn join the party and, well, I dare you to not smile. The title track morphs from a brief ambient-like opening to a midtempo chill-out tune, percolating beats under a sprightly flute melody, jazzy sitar, and synthesizer (un-credited, although I would guess it's Adams) shadings that color the song perfectly. "Like Blue and Velvet" once again starts off in a Native flute vein, but the early introduction of sensual blues piano steers the affair into a different direction, followed by dobro guitar. One can almost picture the sun cresting on the horizon as "Upon Early Rising" starts off, with plaintive piano, flute, and keyboard textures combine to evoke the slowly brightening sky at dawn. Unlike some other tracks on Imaginings, this one more or less just builds on the same elements and doesn't twist and turn into something else, but that is only meant as a description and not a criticism, because the song is so good that it could easily be from a Deuter album and you know that is high praise.

I wish I had the space to cover every track on the album in detail, but that would spoil the fun of hearing the other great songs (not mentioned in this review) for the first time with no preconceptions. I strongly recommend/suggest quality headphones or a decent stereo system for your first listen to this recording. Adams obviously spent a lot of time mixing this because every instrument sounds gorgeous and the balance of each one is spot on, along with the environmental sounds when they are present. Paul Adams, Elizabeth Geyer, David Hoffman, and Pravin Godkhindi have created something special on Imaginings. They have tapped into a universal element of music, a cohesive vision that encompasses a global perspective but merges those separate influences into a sum that invites everyone to the party. It may sound cliché but music is the universal language and Paul Adams is one of its great speakers.

Imaginings is currently available at CD Baby and will soon be available at Amazon and iTunes.
Posted by Bill Binkelman at 1:10 PM