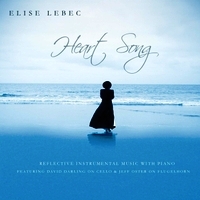 By the end of my first playing of Elise Lebec's Heart Song, I went to the computer to verify that this was, in fact, her second release. Yes, it is. After clearing that up, I listened to the album a second time and my evaluation of this superb album intensified even more. How can an artist release a second album that is so accomplished, self-assured, confident, and, at times, even quite daring? Where does that come from? The composing talent, the ease with which she plays with others, the delicate control of shading, nuance, tone, and the sheer beauty of each piece, all combine into a statement of soulful maturity, emotional depth, and artistic integrity that many performers would be lucky to achieve in their tenth release. It is difficult to overstate how good an album Heart Song is. It bespeaks an artist who knows exactly where she is going with her music and how to get there.

Before getting to the music itself, props must be given to the artist and her co-producer, Michael Rosen, who also mixed and engineered the album and also whoever mastered the final product at Ken Lee Mastering in Oakland California. This is one fantastic sounding album and putting it on while doing something that will distract from absorbing all that this recording offers will be cutting yourself short—trust me on this.

Most of the music on Heart Song is softer in nature, and much of it is pensive and reflective, but not all of it, which I will get to later. Accompanying Lebec on selected tracks are cellists Elizabeth Vandervennet, David Darling, and George Chavez, flugelhorn artist Jeff Oster, and drummer Michael Urbano. As stated above, each of them is integrated perfectly with the pianist's lead melodies, displaying their estimable respective musical gifts.

The album begins with "Silence," a beautiful, plaintive solo piano piece that puts Lebec's expert control of nuance on prominent display, as her hands maneuver deftly, traipsing lightly over the keys on this semi-melancholic song. "Lullaby," the first of Lebec's duets with cellist Vandervennet, is lovely, flowing with melodic warmth. The two artists play as one, complementing each other seamlessly. Real magic starts to happen on the title track, a delicate, somewhat sad, but achingly beautiful romantic tune with a fantastic  main refrain (later in the album, this piece is reprised as a duet with cellist David Darling, and both versions are excellent but have different emotional impact – at least for me).

As mentioned earlier, Lebec takes some chances on this album and "Pirates and Poets" is one of those. Opening with an eruption of eerie tape loops, the song begins as a mournful affair with Lebec accompanied by Vandervennet. Most of the mood is established by the emphasis on minor key notes, including a passage in the middle that teeters on the edge of very mild dissonance (but, to Lebec's credit, it works flawlessly). Just after that, Oster's flugelhorn enters the song, belting out sultry blues riffs that speak of late night affairs gone wrong. Lebec takes her piano into even darker territory as does cellist Vandervennet. The track is flat out killer! "It Was Always You" features the cello duties switching over to George Chavez, and admittedly he does have a different style of playing, albeit every bit as good as Vandervennet. The tempo is somewhat faster than some previous tracks, but yet the mood stays at least somewhat downcast, and I imagine the title may refer to ex-lovers meeting years after the break-up and one of them admits "it was always you that I loved." You may be able to tell by now how deeply Heart Song resonated with me on an emotional level due to the evocations I am describing in this review and yes, Heart Song is an emotional powerhouse for me.

Not everything here is dour, of course. "Afternoon Kisses" (which features Oster and drummer Michael Urbano) skirts with shy playfulness via its low-key jazziness. "A Break In The Clouds" could possibly be described as joyful, albeit in a subdued way, with piano and cello (Vandervennet) chasing each other lightheartedly across a musical landscape. Yet, I found myself most entranced by those tracks where Lebec truly pushes the envelope, such as "Ghost Ships," a haunting soundscape with piano, bells, vocals, and singing bowls, all of which brilliantly capture the image of the titular reference. "Moonlit Waters" features Lebec's singing voice, her breathy vocals weaving a tragic torch song worthy of a late night East Village club where broken-hearted souls have gathered to suffer their solitary pain in a collective setting. Assorted electronic textures and subdued tribal rhythms reverberate underneath piano on "Sacred Land" which also features Erick Gonzalez's bilingual spoken word vocals which seem to be about honoring and treasuring the earth (specifically, the "tree of life") and even life itself.

Three of the final four tracks are solo piano (the other being the aforementioned cello/piano version of the title track, this time titled "Heart Song Avec [with] Cello." Each of these three solo numbers is beautiful, from the pensive "Following The Rain" to "Away Into The Horizon" (the most upbeat piece on the album by far) and ending with "Green Leaves" on which Lebec takes the listener to Ireland for a short (1:42) visit. It's a great closing track, leavening the preceding reflective mood of the majority of the album with a dash of warmth and good cheer as if the artist is waving us goodbye with a smile on her face and the sun in her hair.

By now you can tell how blown away I was by Heart Song. As a jaded 18-years-long music reviewer, I don't impress anywhere near as easily as I once did. Heart Song has me excited to be a critic again, such is its deep, rich, emotional impact. Elise Lebec's talent and vision is staggering. What a future this superb pianist has indeed.

Heart Song is available at CD Baby, Amazon, and iTunes.
Posted by Bill Binkelman at 1:23 PM