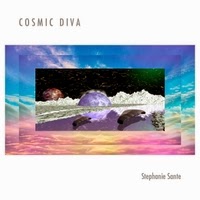 Stephanie Sante has been bopping and cruising along since her debut, Into Light, in 2000. Originally slotted in as a spacemusic artist, Sante offered some unique twists on the genre, not just stylistically (her electronic soundscapes usually blended elements of new age into the more traditional Serrie-esque motifs), but also because she played a midi-guitar controller to make her synth sounds (similar to what Mark Dwane does). I have been reviewing her through the years and watched in admiration as she changed course in 2005 with Coffee Culture, embracing her guitar as the recognizable lead instrument and crossing over into a new arena of jazzy, funky licks married to infectious beats. Over the next two albums (2007's Shine and 2010's superb release, Prismatic), Sante rebooted herself, with the end result being some of the tastiest chill-out, lounge, and Nu Jazz music out there, inflected with some sensuous bossa nova leanings at times. Prismatic is criminally overlooked as one of the best ear candy releases of that year and is also the first album where she stopped using a midi-guitar and played all her synths through a keyboard, using guitar as, well, a guitar.

Cosmic Diva, Sante's latest release, explores the nooks and crannies of this talented and imaginative artist's career so far. While Sante herself thinks this marks a return to spacemusic (and there are spacy moments here, no doubt), the eleven tracks actually encapsulate the many styles and genres that she has recorded over the last 14 years. Knowing Stephanie Sante as I do, it's funny that the title contains the word "diva" as Stephanie is as undiva-ish as they come, instead being a sincere, humble, and unpretentious artist who works hard at perfecting her craft. For Cosmic Diva, Sante received inspiration (per the liner notes) from the science fiction trilogy "The Way" (by author Greg Bear) comprised of the books Eon, Eternity and Legacy.

Musically, the eleven tracks draw from all of her other releases, but not in any way derivatively or as a repetitive exercise. The spaciness of the opening "Foreplay" is accented with tribal rhythms and an exotic sounding Middle Eastern wind instrument. "The Quickening" opens with mellow ambient chill tones before spiraling into a jazzy, funky horn-driven affair punctuated by snare beats. "Moments of Clarity" percolates with an assortment of rhythms and layers of synths, adding some mellow vibes later in the track with halting rhythms. Chattering synths pepper the start of "Link with Me" alongside reverbed tones and jazz-inflected cymbal rhythms. "Group Mind" has a science-fiction meets chill-out mood going on with whirly-gigging synths, sonar-echoes, midtempo beats, and smooth synth pads. Gently strummed guitar opens "Genesis of Creation" soon buoyed by bossa nova rhythms and an undercurrent of silky smooth synth textures. "Crossing the Threshold" features iridescent tones amidst a shuffling beat and funkified horns while "Points of Embarkation" has plaintive echoed piano and plucked orchestral strings, set off by a snazzy, jazzy cymbal rhythm, but then starts shifting between that and an excursion into quasi-Berlin school territory. "Promise Me This" has an light, airy quality to it, dominated by synth strings and a delicate repeating tone melody, anchored by subdued rhythms. The last two tracks are "Love's Journey" which races along at a rapid pace propelled by layers of keyboards and snare beats and some tasty guitar licks, and "Light Always Glistens" which is an apt title for another spacy selection with retro synth sounds lighting up the skies amidst shimmering reverbed bell tones.

For me, Prismatic is still Stephanie Sante's best recording, but Cosmic Diva isn't far behind. Sante has been making great music for a long time and if you haven't checked her out yet, what are you waiting for? Fans of this artist's recent previous work will almost certainly love this album, and newbie listeners looking for cosmic chillage, space-age lounge/jazz, or even just some mellow tunes to bop to will find much to revel in on Cosmic Diva, Sante's most completely realized musical vision yet.

The album is available at CDBaby, Amazon, iTunes, and Digital Tunes.

Posted by Bill Binkelman at 8:58 AM