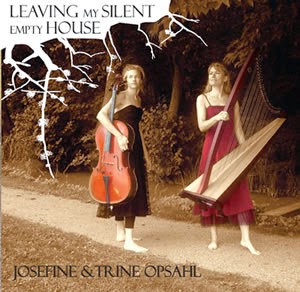 So many times the expression "the apple never falls far from the tree" has a negative connotation, but in the case of mother and daughter, Trine and Josefine Opsahl, the saying instead connotes that talent does indeed run in the family. No, check that - abundant talent runs in the family. Harpist Trine and cellist (and daughter) Josefine come together on Leaving My Silent Empty House and, to be blunt, this album blew me away. I was already wowed by Trine's Somewhere in a Hidden Memory (2012), which for me is one of the finest harp recordings ever released (if you think that's hyperbole, you haven't listened to it yet - trust me). While this album was recorded several years prior to Somewhere in…, Trine obviously had already refined her harp playing to an incredibly nuanced and beautiful level. Cellist Josefine was only 16 when this album was recorded which, when you hear her play, will likely astound you (it sure did me). Like I wrote above, "apple…not far…tree…" Oh yes, so true.

The album's title gives more than a hint of the mood present on many of the eleven tracks, although truth be told, with cello and harp as the instruments, one would expect a more low key, impressionistic, and sometimes somber affair. However, there are moments here when the mood is less melancholic and is, instead, warm and inviting, such as the uptempo "Under a Bright Moon." Yet, the overall evocation of the recording is more in line with the somewhat forlorn album title itself. Of course, if one actually thinks it through, the leaving of a "silent and empty house" might, instead, elicit emotions such as relief, optimism, even joy. However, this is just my analysis from a narrative standpoint. The music is, if not outright somber, more often than not delicate and pointedly subdued. That doesn't keep it from being intensely beautiful and, in fact, while this album would make ideal background music for anything from relaxation and massage to daydreaming and late night reading, concentrated and in-depth listening will reveal much depth and attention to detail (credit mixing and producing to Henning Olsen and mastering to Dave Blackburn). With one exception, all the tracks were composed by Trine, and daughter Josefine arranged all the cello parts herself.

It's somewhat unnecessary to go into a lot of detail about the tracks, since there is a distinct feeling of uniformity throughout the eleven selections. "Fairies in Moonlight" is light in mood and the cello, in particular, seems rooted in classical motifs. "Under a Bright Moon" opens with some solo harp and when the cello enters, the mood becomes more somber and sedate, however the piece does shift gears at the three-minute mark, becoming light-hearted and fanciful, keeping this mood until the conclusion. On "Lion's Heart," the harp has a notable Renaissance sound to its melody and the cello enters the song deep in its lower registers. Again, the piece builds into something more energetic, but not upbeat in mood, just uptempo in pace. "After the Rain" is a gorgeous folk harp number, reminding me of Glenn Walker Johnson's music (an obscure but super talented folk harpist who lives in the northwoods of Wisconsin). It has the same lightness of feel that his music holds - gentle but uptempo (not an easy paradox to master). Cello takes the lead on the title track, and Josefine bows her instrument with sublime grace while Trine follows behind, embellishing the lead cello melody perfectly.  The last track, "True Thomas," sounds Celtic (and it should since it is inspired by the Irish legend of Thomas the Rhyme) and features Trine and Josefine on accordion as well as their respective instruments. It's a downbeat tune, perhaps based on a story laced with tragedy (it has that feel to it), but it's a wonderful closing song to an equally wonderful album.

Leaving My Silent Empty House is a 2008 album and while Trine has since released Somewhere in a Hidden Memory, it's high time the world was favored with a follow-up recording by this mother-daughter duo. Talent this good should be rewarded with acclaim and success, so get onboard and pick up on this one so Trine and Josefine will be motivated and inspired enough to get back in the studio and give us more of the family magic.

The album can be purchased at iTunes, Amazon, and CDBaby, as well as directly from the artist.

Posted by Bill Binkelman at 8:37 AM