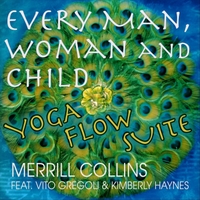 Trust an artist with the talent, imagination, vision, and ambition of Merrill Collins to be the driving force behind an album as amazing as Every Man, Woman, and Child – Yoga Flow Suite. Working with world-renowned producer and multi-instrumentalist David Vito Gregoli (who co-produced the album with Collins and co-authored two of its three tracks), as well as noted vocalist Kimberly Haynes, flutist Laura Halladay, and cellist Maksim Velichkin (the latter two have recorded previously with pianist Collins), Collins has crafted a triumvirate of approaches to meditative/yoga music, which while obviously disparate in literal nature, somehow exhibit clear cohesion in establishing a central mood of peace and unity.


Quoting from a document supplied to me by Collins "These tracks [the three songs on the album] were created to supply Yoga practitioners with body, mind, and spirit materials to use in the Every Man, Woman, and Child International Peaceday Project. The musical themes provide thought stream of our highest intentions toward global harmony and connectivity."


There is a lot more info I could provide to you about the aim and purpose of this project and how it came about, but I encourage you to go to the artist's website if you are interested. Merrill and her collaborators are doing great work on this ambitious and important project.


As alluded to earlier in this review, the three songs travel different pathways in their approach to everything from instrumentation to tempo to mood to musical influences. However, one thing that stood out to me, and was reinforced after each playing, was the obvious commitment each artist made to this recording and the sincerity, depth of feeling, and expert musicianship they all brought to focus from the first minute to the last.

Track one, "Every Man, Woman, and Child: Yoga Flow – Om Mani Padme Hum" is a twist on the traditional mantra chant. The overriding influence is a blend of soft (not smooth) jazz and new age, as well some elements of world beat. Collins unfurls the melody slowly at first and then gradually ramps up the pace of the melodic refrain, always embellishing it to a certain degree, which is why I hear a distinct jazz influence, as well as obvious improvisation (while always staying true to the underlying refrain). Gregoli plays tabla and electric bass on the track and he is the bedrock for the tempo, yet never escalates it beyond an ear-pleasing mid-tempo pace. The interplay between Collins and Gregoli is not just completely simpatico but a true delight. Haynes's vocals enter the song at about the three-minute mark, and she embraces the spiritual nature of mantra throughout while deftly sliding into the almost cheery jazziness that Collins and Gregoli have already established. Late in the track, Haynes' vocals are multi-tracked so that she counterpoints her loftier wordless vocals with a quickly repeating straight up spoken mantra.

One thing I failed to mention earlier is that these three tracks are all long, running approximately 20, 20 and 15 minutes in duration, respectively. I must state that seldom have I been held so transfixed by songs of this time length. It is a testament to the musicians, but I must especially mention Collins, who displays such fluidity in her extemporaneous riffing that if you stripped away Gregoli's rhythms and Haynes' vocals, you think you were listening to a truly great jazz pianist.

The second song is "Every Man, Woman, and Child: Yoga Flow – Ambient Journey" and the track features just Collins on keyboards and Gregoli on tambura and sitar. There are no vocals of any kind on the 20+ minute track, which has a more overt world beat influence due to the sitar's presence. Collins' piano is nicely reverbed and her playing is more minimal than on the previous song, and she also adds some keyboard shadings to add a more ambient aesthetic as well. I was again struck by not just the fluid improvisatory nature of the music but how the subtle machinations by the two musicians not only staved off monotony, but added a subtle sense of complexity.

The final piece, "Every Man, Woman, and Child: Yoga Flow – We The People," reunites vocalist Haynes with Collins and Gregoli and also includes flutist Halladay and cellist Velichkin. At fifteen minutes, it is the shortest track, but follows the same format in that the musicians circle each other with their fluid melodies on flute, voice, drone, cello, and piano, like dancers in a poetic ballet. The cello introduces subtle contemporary classical textures, while Halladay's flute more than hints at new age, and Haynes wordless vocals evoke an ethereal mood of sorts. Haynes, Velichkin and Halladay dominate the song early on, with Gregoli's tabla and bass and Collins' piano joining in after the "prelude." If I was pressed, I would categorize this as a mixture of new age and classical, despite the "world" presence of tabla, as that instrument takes a back seat of sorts to the others. At the halfway point, Haynes' vocals traverse into actual lyric territory with refrains of "Every Man, Woman, and Child" being multi-tracked underneath her soaring wordless vocals above the refrain, as well as a separate refrain of "We The People." The track fades out slowly to a beautiful, soothing ending.

Every Man, Woman and Child: Yoga Flow Suite deserves the wide exposures and heapings of acclaim not just for the musical excellence that runs throughout, but because, at its core, it's so well-intentioned and sincere. This is the epitome of healing music as far as I'm concerned. The album envelopes the listener in beauty, comfort, and an overall feeling of the connectivity that music can bring to us as citizens of planet Earth. To that I simply add "Hear, hear!"
The album is available from Amazon, CDBaby and iTunes.