REVIEW: Grayhawk - Voice of the Ancestors 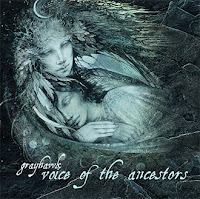 
Grayhawk's visionary and ambitious album, Voice of the Ancestors, serves as a triumphant conclusion to his Shamanic Trilogy (began with Shaman Journey and continued with Blissful Magic – Spiral of the Celtic Mysteries). Actually, labeling this album as "ambitious" is an understatement what with its various global influences and its being anchored by an assortment of events occurring over a span of 11 years, beginning with the tragic death of his son, Christopher Emmet Gibney who passed away 3 weeks shy of his 3rd birthday, and also including the events of 9/11 and travels to Asia in 2015. All of these elements come to play as both indirect and direct influences for the mesmerizing and deeply spiritual music contained on Voice of the Ancestors. The album itself, while having distinct world beat flavors, also features motifs from the new age and ambient genres as well. More than a few tracks feature some kind of vocals (e.g. "Peace Prayer" features vocalists singing/chanting in English, Hebrew, Arabic and Farsi).


Besides Grayhawk's keyboards and synthesizer work (across a variety of interfaces), a plethora of highly talented musicians (some well-known to me, others proving to be a discovery) contribute on an assortment of instruments. Those folks include Hai Phuong on dan bau (a single-stringed Vietnamese instrument), Wouter Kellerman on flutes, Amy Shulman on concert harp, Brad Dutz on percussion, Windwalker Dorn on Native flute, Vito Gregoli on ambient guitar, Jill Haley on English horn and oboe, Karen Olson on viola, and Kirsten Vogelsang on cello. Vocals were handled by Randy Crenshaw, Windwalker Dorn, Darlene Koldenhoven, Ofir Engel (Hebrew and Arabic) and Bahman Mojallal (Farsi).


When evaluating an album like Voice of the Ancestors, so broad in its scope and so personal to its creator, it’s difficult to find adequate words to properly describe the music in both literal terms and emotional impact (the latter, of course, being entirely subjective). However, it’s hard to not feel impacted by the intent of the album’s message (primarily, seeking a pathway to peace for our planet) as well as the beautiful musical treatments which carry that message.


The opening "Transcendent Soul" is dedicated to Grayhawk's now deceased son and it may be the most beautiful piece here, graced with Shulman's delicate harp and Kellerman's flute playing, as well as violin and viola (Vogelsang and Olson) against a serene backdrop of subtle bells and ambient textures. The track is classic new age music as if lifted from the golden age of the genre. Track 2, "The Banteay Srei Temple" marks the emergence of world influences and the song has a marked Asian flavor throughout, as Shulman's harp is counterpointed by Phuong's dan bau, as well as digital erhu by Grayhawk. The mood is somber, restrained, and draped with a blend of mystery and beauty. "Guardians of Goddess Thien Hau" subtly evolves the musical motifs and themes from the preceding track, doubling down on the air of mystery. The title track begins with a quiet slow-tempo beat and airy melody, the rhythm imparting a subdued air of sensuality. Flutes waft in the air over vocalizations from Crenshaw and Windwalker. Traces of the ethno-tribal genre are discernible here and Gregoli's ambient guitar and Dutz's percussion contribute a lot to the song. After the short "Peace Prayer A Capella" (which sounds like a church hymn – meant in the best possible sense),  the album's focal point, both thematically speaking and from the standpoint of it being the longest track, "Peace Prayer" brings Grayhawk's vision of a quest for world peace to fruition, featuring vocals sung in English, Hebrew, Arabic and Farsi. The longest track on the album (10:08) features a mid-tempo percussion beat and has less of an Asian flavor and hews closer to a blend of world chant and new age influences. After the opening English choir vocals, the non-English solo vocals are heard (Hebrew, followed by Farsi, and then Arabic, performed by the vocalists referenced earlier in this review). The blend of music and vocals is gorgeously mixed and utterly mesmerizing in its effect.


The album closes with the 8 minute "Ambient Meditation" and a radio-edit of "Peace Prayer." The former, an instrumental (although with some "ethereal" vocalizations from Crenshaw) is, per the liner notes, a free-form improvisation based on the album's assorted musical themes, but I hear it more as a coalescing of the world influences spread throughout the recording. At times, Windwalker's Native flute is pronounced, as well as Dutz's percussion and Gregoli's ambient guitar, and as a result, this cut has a more pervasive world fusion feel to it.


Voice of the Ancestors is one of those recordings that serves to define an artist's oeuvre, and in this case, it captures Grayhawk's passion and commitment to making the world a much more peaceful place, as well as displaying his affinity for, and love of, other cultures and other peoples of this planet. It's a sumptuously recorded work and beautifully engineered in every aspect (mixing was by Steve Shepherd and the album was mastered by Robert Vosgien at Capitol Studios Mastering). Each artist brings their "A" game to the finished product, united by Grayhawk's almost unreal attention to detail. This is an album that deserves to be heard and appreciated by people all over the planet.
Voice of the Ancestors is available at iTunes and CDBaby
Posted by Bill Binkelman at 4:42 PM