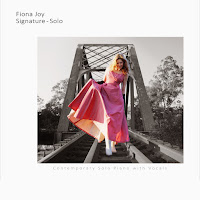 
Fiona Joy's Signature - Solo, her first solo piano album, is something special and is, to my ears, her best work to date. Fiona Joy's earlier albums did a fine job of showcasing both her piano playing and her composing talent, but by putting her in the solo spotlight, her inherent warmth, sensitive touch on the ivory keys, and superb control over a variety of styles, tempos and moods is much more clearly laid out for the listener. This is a pure treasure of a solo piano recording, one that grows on you after each successive playing (and you will probably want to hit "repeat" more than once when you play it). In addition to the music itself, the album sounds tremendous (the liner notes state "recorded by Cookie Marenco at OTR Studios" and Marenco did an exemplary job. High notes ae pure and crystalline and the lower register punches through with drama and passion.


"Ceremony" opens the album with a rapidly played upper register note progression that soon moves down the scale to the middle register with a playful exuberance. Fiona Joy balances upper and middle with adroit skill and artistry, finding the perfect balancing point, and sometimes taking the melody down into the lower registers with equal aplomb. The refrain on this track is ultra-infectious and certainly conveys a sense of the title's evocation of something worth celebrating. "Grace," the second track, goes in the opposite direction, the music being pensive and somber, yet laced with a warm gentility at times (also an occasional deep-seated sense of power). Fiona Joy's subdued playing, with expert command of nuance (especially in the early passages) is beautiful. "Fair Not" has an ebb and flow feel to it, cast in a shadowy mood that is mysteriously romantic and sometimes neo-classical. I hear a subtle gothic (as in gothically romantic) influence at times, but it may not be discernible to everyone. "Once Upon Impossible" (intriguing title, that) features a fluid lead melody with a melancholic air to it to it. The track will appear later on the album done as a duet with acoustic guitarist Lawrence Blatt (the only other artist on the album and only on that one song). Fiona Joy likes to play around with time signatures occasionally and on this song she handles this technique well, slowing down and then elevating the tempo to emphasize the drama of the piece. On "Calling Earth," the sustain pedal (and its reverb effect) conveys (to me) a sense of loneliness and despair which, I imagine, is intentional as perhaps this song could potentially portray being adrift in the blackness (one might see this as music to accompany Sandra Bullock's character trapped above Earth in the film Gravity or that's perhaps my isolated take on it). "Invisible Train" (yet another enigmatic title) captures the feel of traveling at great speed, yet with an undercurrent of darkness or foreboding. Fiona Joy's playing bursts with a mixture of unbridled energy and dramatic tension. Her fingers fly with breathtaking rapidity yet never falter once, even when the upper register explodes in a flurry. Great technique! Other tracks include the reflective tone-poem like title track (one of my favorites not just here but among all the songs she has written over her career), the quasi-minimalism of "From The Mist" (with an undercurrent of stately drama), and the closing "Little Star" with its gentle feeling of nostalgia and a deliberate yet slow tempo. On "Once Upon Impossible" (the second version of the song on the album), besides Lawrence Blatt's guitar (which is quite subdued in the mix), Fiona Joy also sings, her lovely voice giving the track a pronounced, almost ethereal, sense of mystical beauty (part of that is how her vocals are recorded, with some reverb so that they sound especially alluring and mysterious. Her singing reminds me of some of the female vocalists on the Projekt label with that same quality of whispery, breathy, dark sensuality.


While I have enjoyed all of Fiona Joy's previous piano/ensemble recordings or her blend of piano and keyboards, e.g. Blue Dream, 600 Years In A Moment, ICE-Piano Slightly Chilled, et al., I was unprepared for what Signature - Solo unveiled to me. Pared down to the bare essentials, Fiona Joy's piano playing can not only stand on its own, but is a delightful feast for the ears, full of emotion, resplendent with artistry and technique, and draped in a myriad of emotions that comes through on each and every note and chord. It's sure to be one of the best piano recordings of this year and represents a new high water mark for this talented woman, for whom the future looks ever brighter all the time.

Signature - Solo is available at Bandcamp, Amazon, and iTunes.