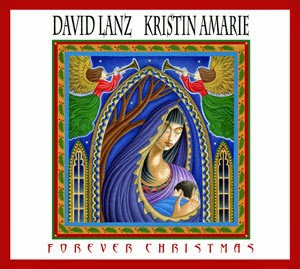 One of the founding artists of the new age piano genre, David Lanz, and the ultra-gifted vocalist Kristin Amarie, collaborate on a welcome addition to the holiday music canon, Forever Christmas. The duo are joined on the album by some talented guest stars: Eric Tingstad (guitar), Nancy Rumbel (woodwinds), Walter Gray (cello), Gary Lanz (guitar), Keith Lowe (bass), and Alonzo Davideo (guitar), although piano clearly dominates the recording. Eleven of the album's fourteen tracks are originals–unusual for a Christmas album but also a welcome change from the norm in this genre. A mixture of instrumentals and vocals is also a nice touch and gives the recording even broader appeal. Amarie's voice is a thing of rare beauty–crystal clear (her wonderful annunciation makes it easy to understand the new songs' lyrics), incredibly expressive, and heart-breakingly beautiful to hear, whether she is singing barely above a whisper or hitting an emotive crescendo. Lanz's playing is, as long-time fans have to come to expect, the very definition of superb control of nuance and infusion of sincerity and warmth.

Almost all of the music is on the softer, romantic side of the mood continuum (although one uptempo piece, "Jubilate," livens things up for a brief moment). As such, the album would be a nice soundtrack for quiet gatherings during the holiday season, maybe relaxing in front of a roaring fire, or while trimming the Christmas tree, or as Christmas Eve transitions to the morn (resting up before the kids come pouring down the stairs to see what lies under the tree).

Kristin Amarie's voice cannot help but be the star on the tracks on which she appears. The title track (accented by bells, strings and Rumbel's woodwind) could easily become a holiday classic–the lyrics are some of the best I have heard in a "contemporary carol" in years, genuinely warm and touching without resorting to cliché, maudlin sentimentality, or greeting card simplicity. Her take on "O Holy Night" is a revelation as her voice seems to meld with the spiritual words in perfect symmetry, guided by Lanz's superb piano playing which matches her emotional impact at every turn. On the higher notes, which sometimes trip up lesser vocalists, Amarie seems to find a whole other gear, so to speak. At one point, my breath was literally taken away.

Scattered among the earlier tracks are two "gold nuggets," i.e. short (less than 2 minutes) solo piano pieces ("Snow Dance," and "La Estrella de la Navidad") that showcase Lanz's playing at its most tender and evocative. Throughout the album, Lanz continues to show why even after all these years he is a force to be reckoned with in the densely populated genre of new age piano. In fact, his playing on the album is among some of the best work he has done in years. He and Amarie find a perfect "simpatico" moment on the reflective ballad "What Is Christmas" which could easily be a huge radio hit if released as a single (hint hint).

I've reviewed dozens of holiday music recordings over the years but I can't remember the last time I was so touched by an album, especially one which featured mostly original compositions. Clearly, Lanz and Amarie have tapped into the deepest, truest resonance of Christmas time and the holiday spirit. Whether it's the former's flowing piano melodies that are as warm and welcoming as a fire in the hearth for a weary traveler or the latter's tender, soulful vocals which serve as a soothing balm for this mega-stressful time of year, the result is an album that you and your loved ones will enjoy time and time again, year after year–a recording that will light the candle of holiday spirit on even the coldest of winter nights.