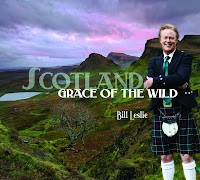 Bill Leslie (along with wife Cindy and son Will) traveled to the ancestral home of the Leslie clan recently and despite this being Bill's third visit to Scotland, for some reason, he saw the land with new eyes and a deeper sense of appreciation, fondness, and love for this country of rugged beauty, friendly people, and landscapes that are truly breathtaking. As he wandered taking photos just before and after dawn, some of the songs on this CD began to take root and grow in his mind. Scotland - Grace of the Wild is the eventual end product that sprung from those early morning walks as well as other travels during that trip. All I can say is we are fortunate he decided to get up early each morning. Leslie has blessed us with what I think is his finest album to date, a recording to cherish through many playings.

Having reviewed several earlier recordings by this talented multi-instrumentalist (guitar, whistles, piano, organ, keyboards), I knew the artist had a special affinity for Gaelic/Celtic music (there are usually some Celtic-influenced tracks on each album). I have commented more than once on how he and the accompanists (always hugely talented) he plays with sometimes resembles the pioneering Celtic fusion group Nightnoise (one of the founding artists on Windham Hill). On Scotland - Grace of the Wild, this comparison to Nightnoise reaches its zenith. Not in any way as an imitation, but as an evolution, continuing the same music magic that Mícháel Ó Domhnaill, Billy Oskay, Tríona Ní Dhomnaill and Brian Dunning started with their band. It goes without saying that if you are a fan of albums such as At the End of the Evening and Shadow of Time, you will likely love this record.

Scotland - Grace of the Wild features fourteen tracks, five of them traditional and nine of them original compositions by Leslie. Taking over a lot of the piano playing duties is long-time friend Bill Covington (who also did the piano arrangement and co-produced along with Leslie and John Plymale; Plymale and Wes Lachot mixed the album, and did a splendid job). Joining Leslie and Covington (who, by the way, also plays accordion on the CD) are Jennifer Curtis (violin), Nancy Green (cello), Will Leslie (percussion), David Oh (cello) and Melanie Wilsden (oboe).

Most of the music on the album is low-key, sometimes somber and reflective, other times warm and romantic. There are a few sprightly moments here and there, e.g. the light-hearted traditional tune, "Ye Banks and Braes" and the last third of the original song "Jonathan" which is where the Leslies, joined by Curtis, Green and Covington tear it up, playing with an outpouring of joyfulness and good cheer. "Flowers of Edinburgh" (another traditional piece) features a subdued but noticeable jauntiness and the song sounds like it has been around for a long time with an almost Renaissance feel to it (a brief online search credits its origin to 1740).

Many selections capture, in music, the very essence of a country with haunting moors shrouded in fog, sheer, mountains of rock, mysterious lochs surrounded by rolling hills, castles which have stood for hundreds of years, and charming towns and villages. The focal point of much of the album is Bill Leslie's evocative whistle playing, and while all the participating players contribute at one time or another, it is the lilting tones of his whistle that resonate deepest.

I wish I had the space to detail every track, as all are worthy of mention. The title track is a gentle meditation on which every artist takes a turn in the spotlight (whistle, violin, cello, oboe) and then come together as a group, finishing with piano and guitar in the spotlight. "Loch Lomond" is emotionally rich and heartrendingly beautiful, featuring a particular nice piano arrangement by Covington. "Dunnottar" features ambient keyboards underneath a plaintive whistle melody accompanied by guitar, piano, accordion and violin (the latter which also takes the lead at times). The only solo number on the disc is the closing "Across the Moor" which brings the CD to a perfect ending, evoking the titular fog-shrouded landscape via deep echo on the Low D Michael Burke whistle and a subtle yet effective drone underneath.

One thing that has to be emphasized is how much of an ensemble affair Scotland - Grace of the Wild ultimately is. Leslie has always been an excellent band leader, never being selfish and hogging the spotlight, but giving everyone their opportunity to take over a song and put his or her stamp on it. While his whistle may seem to dominate the recording, it's only because the sound of the whistle is so deeply connected with Scotland and Leslie is such an expert player. Every single artist who is on this disc deserves credit, so if I have made it seem otherwise, my apologies. However, since Bill Leslie penned the originals, he does get an extra nod and tip o' the hat.

If you come to love Scotland - Grace of the Wild as much as I do, the only hazard you face is a hungry longing to travel there and witness its beauty and charms in person. Still, I suppose that's what our imaginations are for…traveling without traveling. With music this wonderful, all we need do is close our eyes.

NOTE: This CD will officially be released in mid-October. Links to sale outlets will be added to this review the album is available for purchase. Past Bill Leslie recordings have been available at Amazon, CDBaby and iTunes.